Traverse City Debates the Future of its Zoo 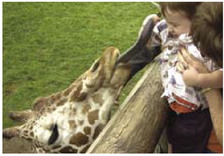 TRAVERSE CITY — A July opinion column in the Traverse City Record-Eagle called on the city to privatize its Clinch Park Zoo. The zoo has long been located on prime real estate along Grand Traverse Bay in downtown Traverse City. According to the author, Karl DeFoe, taxpayers have paid out $3.4 million in subsidies since 1990 to keep the zoo afloat. Revenues generated by the zoo have only provided about 30 percent of its annual cost, noted DeFoe.

The Clinch Park Zoo is hardly the first government zoo to require subsidies. DeFoe mentions a few by name, including the Saginaw Children’s Zoo. Years ago the Mackinac Center for Public Policy did a review of this zoo’s transition to private status. The Center found that as a result of its conversion to private ownership and the hiring of a maverick zoo leader, the zoo increased in size, attendance, and in the population of healthy animals. Since 1996 there has been an 80 percent increase in the number of animals that can be viewed. To read more about the Saginaw Children’s Zoo privatization visit the Mackinac Center for Public Policy’s Web site at www.mackinac.org/1654.

While DeFoe’s article mentioned the cost savings that could be realized by eliminating Traverse City’s subsidy, it failed to mention the other financial benefits of zoo privatization. The city could get out of the zoo business altogether by selling off the land to a private owner and pocketing the proceeds. It would then have a new tax revenue-generating property on its rolls.