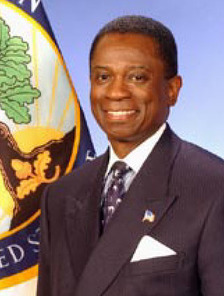 When Jack Martin was appointed chief financial officer of the U.S. Department of Education, the department’s financial woes were a longstanding problem. But as the saying goes, "If you want something done, give it to a busy person" — and Martin, a native of Ferndale, Mich., has always been a busy man.

After beginning his career at General Motors, Martin went on to hold management and accounting positions at a variety of companies. At the height of his private-sector career, he acted as chief executive officer of his own accounting firm and of the Home Federal Savings Bank of Detroit. Martin thus had the accounting expertise he needed when he was confronted with the challenges he inherited at the U.S. Department of Education.

When Martin took the reins in early 2002, the DOE had received a clean financial review and passed an audit only once in its two decades of existence. Following his arrival, however, the department has received a clean opinion on its financial statements for two years running.

With the presidential administration’s emphasis on education reform, this improvement was seen as vital. In December 2003, then-Secretary of Education Rod Paige praised the accounting improvements as "major milestones" and stated: "We have made great strides in improving financial operations here at the Department of Education, and (the 2003) audit proves that we can lead by example. It also demonstrates that we are at the beginning of a sustained, trustworthy stewardship of taxpayer dollars here at the department."

Kudos came from outside the department as well. In September 2004, the DOE was awarded a Certificate of Excellence in Accountability Reporting by the Association of Government Accountants for the department’s improved integration of financial and program reports. Last December, the DOE received the Presidential Award for Management Excellence for its "improved agency-wide financial performance." According to the U.S. Office of Personnel Management, the Education Department was one of only seven federal agencies to receive the presidential award among the 68 that were nominated.

Martin’s efforts at the Education Department were further informed by his extensive experience in the not-for-profit business sector. According to his federal biography, Martin served in a variety of nonprofit posts prior to his stint at the department, including chairman of the board of the Detroit-based Health Alliance Plan, board member for the Henry Ford Health System and treasurer of the Alzheimer’s Association. He had also worked with government institutions, acting as vice president of the Merrill Palmer Institute at Wayne State University in Detroit and chairperson of the Michigan Advisory Committee to the U.S. Civil Rights Commission.

Martin’s skills have brought him additional duties within the administration. Last April, he was asked by President Bush to serve as acting director of the Selective Service System while continuing to work as chief financial officer of the Education Department.

This appointment led Martin into a campaign-season controversy. When a journalist inquired whether the federal government could reinstate the draft, Martin answered, "I think we could do it in less than six months if we got the call." Although the administration stated it was not planning a resumption of the draft, Martin’s comment made the rounds quickly. Martin subsequently clarified the remark, saying, "There is absolutely nothing we are doing as an agency to implement a draft." Ultimately, the controversy was short-lived.

Martin’s political career has so far been a footnote to his service at the DOE. His financial expertise at the Education Department appears to have provided important accounting improvements to an organization that needed them.