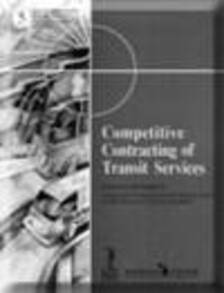 In the United States, public transit operating costs per vehicle mile increased 418% from 1970 to 1990—twice the rate of inflation and two-and-a-half times the cost of similar service in the private bus industry. Two-thirds of public transit costs are paid by federal, state, and—predominantly—local subsidies.

Nearly 10% of regular transit bus service is competitively contracted in the United States. Savings range from 30% to 60%, and independent studies report that the safety, quality, and reliability of competitively contracted service equals or exceeds that of the public sector. But political, bureaucratic, and perceptual barriers have prevented competitive contracting of transit in many areas.

The success of competitive contracting depends on three fundamental principles: public control, competition, and open access and process. First, the public authority has a responsibility to public transit riders and taxpayers to ensure that public services meet quantity and quality standards that are set by government. Second, contracting programs must foster the development and maintenance of a truly competitive market so that costs are kept under control. Third, these two principles are best served when all interested parties are allowed to participate and have access to records.

Public authorities would be wise to consult with private transportation providers before designing and issuing any requests for proposals (RFP). An RFP is a negotiated bid that allows for post-bid negotiating. It is less rigorous than other forms of bidding and used frequently by governments in Michigan. Advance consultation permits the public authority to consider alternatives for service and contract design that take full advantage of private-sector capabilities, consistent with public requirements.

RFPs should contain a complete description of the service to be purchased, including schedules, service miles, service hours, and any applicable service or safety standards. Further, RFPs should contain a clear description of the required proposal format. In New Orleans and Denver, public transit authorities have provided detailed questionnaires and cost forms, which, once completed, are the private company’s proposal. This approach reduces uncertainty about what is required in the private company’s proposal and greatly simplifies the preparation of proposals. RFPs, at a minimum, should contain detailed cost proposal forms to be completed and submitted as a part of the proposal.

The time span between issuance of the RFP and submission of proposals may be the single greatest deterrent to the number of competitors. There should be sufficient time for all potential contractors to solicit and receive copies of the RFP. Normally, two months is sufficient time for private companies to respond. For large contracts needing 100 vehicles or more, three or more months may be necessary.

In the United States, public transit operating costs per vehicle mile increased 418% from 1970 to 1990—twice the rate of inflation and two-and-a-half times the cost of similar service in the private bus industry.

Public transit authorities often compare in-house operating costs with proposed competitive costs before determining whether to award a contract to a private contractor. Unfortunately, not all public-sector costs are always included when determining the expense of running an operation in-house. For instance, costs incurred by one city department (transportation) are often charged to another city department (management and budget). This understates the true cost of providing the service. Great pains should therefore be taken to include all financing in a final analysis.

Many public authorities hold one or more pre-proposal conferences with potential contractors after issuance of the RFP. These conferences often result in changes in the proposal package as the public authority makes corrections in the original specifications or, as a result of questions from the potential contractors, becomes aware of alternative ways to deliver the service.

Most public transit authorities in the United States require that contractors submit a final price that is largely unalterable throughout the term on the contract. This is called a fixed-price contract. Most contracts contain a provision that allows for minor charges in the amount of service. Other contract clauses may include a renewal option, the duration of the contract, market-share limits (limiting a single provider to a geographic region), service specifications, insurance coverage, performance bonds, performance standards, and an enumeration of penalties and incentives.