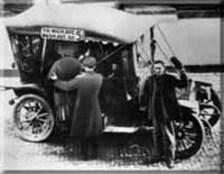 Jitneys, like the one pictured here in Lansing, played a major role in early American urban transportation. Once regulated into extinction, jitney services are now making a comeback—especially among minority entrepreneurs.

In 1984, Charles Murray’s book Losing Ground offered a critique of government welfare policy so powerful that it ultimately ushered in a wave of sweeping new welfare reforms. Now, a book has appeared that may well do for urban transportation what Murray’s book did for welfare. Curb Rights: A Foundation for Free Enterprise in Urban Transit diagnoses public transit problems with piercing logic and prescribes a remedy that will help to revive America’s inner cities.

Urban transit everywhere, including Detroit, is beset with problems. Great expense and low ridership plague public transportation. Huge subsidies are needed to keep it afloat. Overregulation of taxicabs assures protection against new competition for those who got into the business when there were few regulations, but the result for cab customers is high costs and headaches. Attempts to centrally plan mass transit in most major cities have only produced inefficient, inconvenient, and inflexible monopolies.

All this cries out for a completely new approach to urban transit, argue the authors of Curb Rights. They urge that we waste no more time arguing over the size of subsidies or how much federal money cities ought to claim for their transportation bureaucracies, arguing instead that, "It makes no more sense for government to produce transit than it does for government to produce corn flakes."

In his review of Curb Rights in the Southern Economic Journal, Peter Gordon writes,

If there is any future for transit, it has to approximate many of the advantages of private autos: It has to be flexible enough to connect origins and destinations that are increasingly ubiquitous. It also has to be managed by entrepreneurs rather than by politicians. Can we really invent alternative modes that are a good enough substitute for enough people to make a market? Transit privatization along with curb rights are necessary conditions. Whereas the former is an old idea, the latter has not been fully developed.

This book, however, will begin to change that.

The title Curb Rights is derived from the authors’ thesis, which is that cities must establish a free transportation market grounded in property rights to those locations where passengers board—namely, the curbs. That means that scheduled bus services, cabs, and jitneys (vehicles that travel a fairly regular route but not on a fixed schedule) would have "curb rights" to operate at certain times and places.

Why are curb rights important? Because of a practice known as "interloping," where cabs and jitneys scoop up passengers from a bus stop a minute or two before the bus arrives. Unrestricted interloping, which exists in the absence of established property rights to curb space or curb time, can destroy a scheduled bus service by depriving it of the ability to earn back the investment it makes in building its passenger volume.

Michael Munger, an associate professor in the department of political science at Duke University, explains how a lack of curb rights affected the Los Angeles-based business "Super Shuttle," which bought quality vehicles, trained drivers in the geography of the Los Angeles area, and made it easy to call for shuttle service between city centers and other transit services:

"Interlopers drove Super Shuttle out of business. Other firms, knowing where Super Shuttle customers congregated at airports, simply drove around the terminals until they saw a rider. Stopping, the interloper offered a lower fare to the same location, and the customer stepped in. However, those vehicles were often poorly maintained and driven by fly-by-night operators without training, safety awareness, or even proper insurance . . . . Since Super Shuttle could not defend their curb rights to customers attracted by their investment, they lost that investment to the interlopers."

The authors of Curb Rights demonstrate why companies must be able to profit from the customers that they draw to the curb. If any vehicle can appear at a stop and pick up passengers waiting for a brand name carrier that had invested in advertising or in sheltering that stop, then that same brand name carrier will eventually leave the market, and consumers of quality transit will be poorer for it. That’s exactly what happened to Super Shuttle.

Curb Rights: A Foundation for Free Enterprise in Urban Transit