As Americans celebrated Independence Day this past summer, few probably realized that it took nearly all the money they earned since New Year’s Day to pay their share of the cost of government for 1996.

Cost of Government Day (COGD) marks the calendar date by which the average American has earned enough, in gross income, to pay for all direct and indirect taxes for that year. This includes total federal, state and local government spending plus the cost of regulation. In 1996, COGD fell on July 3. 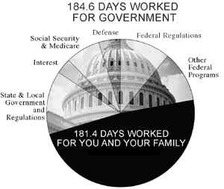 Americans spend just over half their year’s earnings to pay for government services and regulations. Out of 366 days in 1996, the average American worked 184.6 days (50.4 percent) to pay for government, leaving 181.4 days for him or her to earn enough to pay for food, housing, clothing, transportation, education, health care, savings, and discretionary income.

Government provides needed services and plays a crucial role in defending the rights and freedoms of citizens, and these things must come at a cost. However, many people now question whether the cost of government is too high and whether government can perform its core functions at less expense. Some even ask how free our society can be if over half of its productive time per year is devoted to paying for the cost of governing it.

The Americans for Tax Reform Foundation’s annual attempt to answer this question is Cost of Government Day. The aim of COGD is to draw attention to and spark discussion about the size, scope, effectiveness, and cost of government in our country.

The 184.6 calendar days Americans will spend in 1996 working to finance government is divided as follows:

Americans for Tax Reform Foundation relies on a numberof authoritative studies and the government’s own statistics to calculate the annual cost of government. The main source of government data is the U.S. Commerce Department’s National Income and Product Account.

The framework for calculating the cost of regulations is derived from a 1995 report to the U.S. Small Business Administration by Rochester Institute of Technology Professor Thomas D. Hopkins, a leading authority on American regulatory costs. His figures are augmented by estimates provided by other economists and consultants to the Foundation.

This year, Cost of Government Day arrives earlier than in recent years for several reasons. First, defense spending cuts more than offset continued growth in social and discretionary spending. Secondly, reform efforts in Congress have reined in the growth of some federal programs.

Increasingly effective privatization initiatives at the state and local levels have also contributed to COGD’s earlier arrival this year. Over 60 functions of Michigan state government have been either privatized or evaluated for privatization (as of March 1, 1996), saving working men and women millions of dollars. (See MPR Spring 1996.) Michigan posted the largest sale of any state-owned assetwhen it sold the Accident Fund insurance company for $255 million in cash. (See MPR Spring 1995.)

Indeed, it is at the state and local level that officials get the most leverage from privatization. Officials can use money saved from privatization to reduce the tax burden of their citizens, or to improve or expand service in other high priority government services. While controversial government cost-cutting ideas–balanced budget amendments, flat tax rates, tax limitations–are debated in distant capitals, privatization is being embraced as a practical, local tool.

Privatization is emerging as a bipartisan, good-government initiative, and it is one way that local leaders can help make Cost of Government Day come earlier.

Few tools offer local government officials as much promise to maintain or increase the effectiveness of government services while decreasing their cost. Privatization is emerging as a bipartisan, good-government initiative, and it is one way that local leaders can help make Cost of Government Day come earlier.