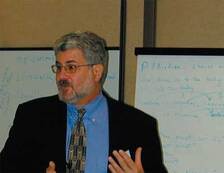 Should the United States substantially increase public health services for mental health care? Is a mental illness the same as a physical illness? Should drug treatment be required in place of prison sentences for criminal drug offenders?

These are just a few of the questions tackled at the Mackinac Center for Public Policy's 15th Annual High School Debate Workshops, held this fall in Grand Rapids, Jackson, Livonia, and Midland.

Expert speakers from around the country provided over 400 students and coaches from public, charter, and private schools around the state with information on the 2002 high school debate topic, "Resolved: That the United States federal government should substantially increase public health services for mental health care in the United States."

The annual debate topic, which is debated by over 100,000 students across the country, is selected each January by committees of state and national debate officials representing the National Federation Interscholastic Speech & Debate Association.

Students grappled with a host of topics including drug and alcohol addiction, Ritalin use, insanity, domestic violence, mental health patient privacy rights, and whether government should play a role in health-care policy.

"[Today] I witnessed 50 ninth through 12th graders from different Michigan communities learning debate, challenging their thoughts, making them think beyond mere opinion ... watching students and ... thanks to you ... future leaders grow," Nardizzi wrote in a thank you letter to Mackinac Center contributors.

"This program is a great experience! This was my second year coming, and each time I receive a lot of great information," wrote Ashley Gonzalez, a student at Adrian High School.

Over 15 years, Mackinac Center High School Debate Workshops have equipped nearly 7,500 debaters with winning ideas, generating a ripple effect that has extended to all areas of the education community.

The debate workshops are held every fall and are open to public, private, and charter school students from around the state.