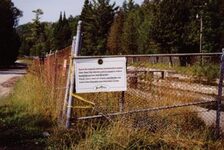 The publicly financed Oden State Fish Hatchery, above, remains closed to the public as construction efforts run behind schedule. There is no hatchery function performed by the state today that could not be performed privately if lawmakers would allow it.

Does the State of Michigan really need to be in the fish hatching business?

Our state government has been hatching fish since 1873, when $1,200 was first appropriated for the construction of a hatchery in Cass County. Today, the state operates six fish hatcheries, located in the counties of Van Buren, Benzie, Wexford, Marquette and Emmet. Together these are capable of producing a million pounds of fish annually. In 2001 the state produced 48 million fish.

Might private entrepreneurs be more concerned than officials of the Michigan Department of Natural Resources (MDNR) with satisfying a demanding clientele, and doing so in an economically efficient way? Michigan legislators ought to consider, as an experiment, privatizing one or two hatcheries to study the efficacy of private-sector involvement in growing fish for Michigan rivers and lakes.

According to the MDNR it costs the state a system-wide average of $6.92 per pound raise fish based on "known costs." According to Michigan private aquaculture officials, it costs the private sector less than $2.00.

For the 2002-2003 fiscal year, the "fish production" line item in the state budget was $6.8 million. But this figure doesn't come near the entire state cost of producing fish for deposit in Michigan's lakes and streams. General state fisheries management is a $24 million annual endeavor.

And that figure doesn't include capital costs, the large investments made by the state to improve the fisheries infrastructure, which raise the cost of state-produced fish. For instance, the Oden state fish hatchery is being renovated at an estimated cost of $11 million, which is not reflected in the state fisheries budget.

It's not as if Michigan doesn't offer a lucrative opportunity to private entrepreneurs. The Great Lakes State is a fishing paradise. According to the MDNR, Michigan offers more than 3,000 miles of shoreline, more than 11,000 inland lakes more than five acres in size, and 36,000 miles of rivers and streams, including the world famous Au Sable River. The Michigan sport fishing industry alone generates $1.4 billion in economic activity statewide.

Entrepreneurs already are involved in hatching fish, to the degree that they can make a profit competing against their large-scale competitor subsidized by taxes and fees. Sportsmen are charged taxes on fishing gear and purchase licenses each year. A portion of the revenue from these sources are invested in state hatchery management. As of 2000, Michigan was home to 65 private aquaculture facilities (licensed by the state to raise products as diverse as catfish and shrimp), 33 of which are commercial trout operations that sell more than 474,000 pounds of fish annually. The value of the fish stock sold ranks 12th among the 50 states.

State ownership of hatcheries is nothing new. Indeed, a survey of all 50 states by Michigan Privatization Report has found that 49 of them own at least one fish hatchery. Delaware stands alone in owning no hatcheries (but it is thinking about getting into the business).

On the other hand, there are signs that states are beginning to question the government's role - or at least to recognize that private businesses can hatch fish far cheaper. Nineteen states currently supplement or intend to supplement their fish production by purchasing stock from private, for-profit businesses. Oregon, which owns 34 hatcheries, is starting a pilot program to ensure that a minimum 10 percent of the state's fish stock is obtained from private sources. Private hatcheries could provide an even greater percentage.

There is no reason why a hatchery that is a private business couldn't operate according to the same quality guidelines the state works under, and for less. One way to find out is to experiment with privatization.

The Michigan Legislature should start a pilot program of its own that would allow for the sale of at least one of its state hatcheries to a private business. The program should also include a contracting arrangement whereby a private business operates a state-owned hatchery. The state could mandate production requirements as part of the sale and track the quantity and quality of the fish produced at the newly privatized center.

If the program works, other sales could ensue. The state could also ask the federal government to turn over its three Michigan-based hatcheries to the state for sale, and any savings from privatization could be turned back, for example, to Michigan fisherman in the form of less expensive fishing licenses.

Simply because the state has been providing a particular service for a long time doesn't necessarily mean that it should continue to. Plenty of private alternatives to state fisheries exist and they should be explored by officials desiring the best services at the lowest cost for Michigan sportsmen.

Michael LaFaive is an economist and senior managing editor of Michigan Privatization Report.