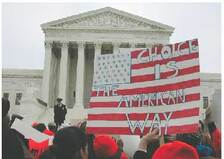 Did the Supreme Court make the right decision in upholding school vouchers?

After decades of often animated conjecture and debate, the Supreme Court concluded in Zelman that Cleveland’s publicly-funded voucher program is constitutional. The Court’s long-awaited decision is good news for choice advocates in general and thousands of low-income Cleveland school children in particular. In its 5-4 decision the Court reversed the Sixth Circuit Court’s conclusion that the Cleveland voucher program violates the First Amendment’s prohibition on the establishment of religion. Writing for the Court, Chief Justice Rehnquist concludes that the Cleveland voucher program does not put the government in the unconstitutional position of sponsoring religious indoctrination. Justices O’Connor, Scalia, Kennedy and Thomas joined on the Court’s opinion.

A full picture of Zelman’s impact on school choice will not emerge for some time. Although five Justices signed the majority opinion, the numerous concurring and dissenting opinions evidence a divided Court. Despite the complicated nature of this decision, however, four points are already clear.

First, Zelman will prove important for the way other voucher programs are structured. In stark contrast to the Supreme Court’s 1954 Brown decision, the Zelman opinion is closely divided and comparatively narrow, evidencing the justices’ collective caution. By confining itself to the technical constitutional question presented, the Court steered clear of endorsing voucher programs as a matter of education policy. However, the opinion makes clear that carefully crafted voucher programs can successfully navigate through the often murky First Amendment waters. The decision will likely stimulate prompt legislative activity.

Second, the Court expressly noted the larger educational context that framed Cleveland’s voucher program. Specifically, the Court remarked that the voucher program is nested within a broader array of educational options that include such public choice options as magnet and charter schools. It is difficult to over-emphasize the substantive weight of this point. In many ways, this issue—raised at oral argument by Justice O’Connor—pivots on a denominator question. The religious neutrality of a voucher program is not determined by focusing on how many students take their vouchers to religious schools, as this represents only one portion of the denominator in question. Thus, the fact that 96 percent of students participating in the Cleveland voucher program attend religious schools, according to the Court, is of no constitutional concern.

Third, the Court places great weight on the nature and source of the choice decision itself. The Court makes the point that whether vouchers end up at public, private, or religious schools flows not from any governmental action but “only as a result of numerous, private choices of individual parents of school-age children.” Thus, the Court concludes that it is constitutionally “irrelevant” that the vast majority of voucher recipients selected religious schools. Such a result does not dislodge the Court’s characterization of the voucher program as religiously neutral.

Fourth, through its decision in Zelman, the Court effectively shifts responsibility for the development of voucher programs from the judiciary into the collective hands of lawmakers, governors, and citizens. That is, we can now expect choice supporters and opponents to take their cases to lawmakers and governors—rather than judges—with greater alacrity. (Of course, no decision will preclude courts from further involvement with disputes over choice programs and establishment-clause issues.) This represents a significant shift in terms of how the debate surrounding school choice is cast. Policy rather than constitutional law will likely moor future school choice debates. We should expect a fuller, more robust discussion of the political and policy issues surrounding school choice, including vouchers, especially if, as is likely, policymakers continue to pursue school choice as a viable education reform option. Political leaders and policymakers can no longer point to constitutional uncertainty as an excuse to deflect attention from school choice policies. It should become equally clear how political leaders discharge their obligations and address the political and policy factors shaping school choice.

Michael Heise, Ph.D., is professor of law at Case Western Reserve University and served in the elder Bush’s administration as deputy chief of staff to the U.S. Secretary of Education. This article was previously published in the Education Gadfly www.edexcellence.net/gadfly/.