Pulling down the edifice of knowledge

"Left Back: A Century of Failed School Reforms" 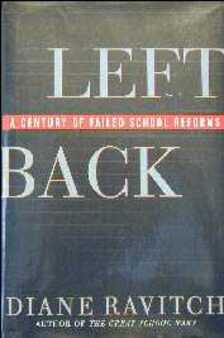 "It is time to renew the academic tradition for the children of the twenty-first century."

For decades, bits and pieces of the history of how America's educational crisis came about have trickled out to the public, sometimes from dubious sources, with little in the way of authoritative credibility to pull the whole picture together. In her new book, "Left Back: A Century of Failed School Reforms," education historian and policy analyst Diane Ravitch has compiled a genuine history, accessible to the average reader, of just what happened to cause America's educational meltdown.

Ravitch's thesis is simple, but hard to grasp in its full implications. It is that beginning early in the 20th century, possessed by what they thought were visionary notions, education reformers began systematically to abandon the old, classical academic curriculum—"the systematic study of language and literature, science and mathematics, history, the arts and foreign languages"—in favor of a pragmatic, utilitarian model aimed at "social efficiency."

Ravitch correctly points out that the current dispute over standards and testing is simply another flare-up of the same century-old debate over the relevancy to modern life of the classic, liberal arts curriculum. Ultimately, the line in the battle over education in America is drawn between "knowledge for general intelligence" and "education for utility." Choose one or the other and you set in motion radically different educational programs, one which proved successful for centuries, the other which has proved a dismal, universal failure.

Is knowledge we can "use" the only knowledge worthy of pursuit? Or does that knowledge emerge from a wider reservoir that takes in the philosophical, the transcendent—or the poetical and artistic—in addition to the temporal and the scientific? Is education for vocation—getting a job—or is vocation merely one of many purposes served by learning once order is imposed on the wide range of knowledge? These are the questions that lurk in the background of the debate over American education in the 20th century, and whisper from behind every page of Ravitch's book.

"Education for utility" is the term Ravitch uses to describe a revolutionary overthrow of centuries of experience in learning; a revolution that placed unprecedented authority in the hands of academic "experts" less concerned with the content of what was taught, and more concerned about "new" and "progressive" methods they could devise for consumption by the masses.

Thus began the deterioration of expertise in subject matter too characteristic of today's teaching profession, and the phenomenon of faddishness with regard to teaching methods, promoted by a "pedagogical profession" that dominates today's education establishment. As this new profession was consolidating itself, it attracted those seeking to "liberate" children from traditional liberal arts learning, and teacher's colleges became "seedbeds of progressive education."

This teaching vanguard sought to "refute the assumptions of traditional education . . . and encourage schools to replace traditional subjects with practical studies." Unfortunately, the result was to put the traditional curriculum—which had produced the very educators who were now tearing it down—"up for grabs, available for capture by any idea, fad, or movement that was advanced by pedagogical experts, popular sentiment, or employers."

Over the years, progressivism took many forms, some blatantly elitist. One of the more pernicious trends was to view the millions of immigrant children populating U.S. cities in the early 1900s as ill-equipped for rigorous study. The "powers" possessed by these students were regarded as "fundamentally manual," a notion progressives used as one of several excuses to abandon the traditional academic curriculum.

Today, as educators scramble for explanations, politicians for solutions, and parents for answers, it is instructive to remember what W.E.B. DuBois told a group of teachers in 1935: "The school has again but one way, and that is, first and last, to teach them to read, write, and count. And if the school fails to do that, and tries beyond that to do something for which a school is not adapted, it not only fails in its own function, but it fails in all other attempted functions. Because no school as such can organise industry, or settle the matter of wage and income, can found homes or furnish parents, can establish justice or make a civilised world."

"Left Back" recounts the failure of numerous 20th-century pedagogical theories, such as the child-centered, the self-esteem, the I.Q. testing, and the multicultural movements. All of these share a common root: the rejection of education's "historic rationale"; the idea that truth, wisdom, and knowledge are worthy of pursuit for their own sake, and not for what they can "do" for the individual or for society.

Twentieth-century reformers thought they were merely being practical in rejecting such "quaint" ideas. But what they actually accomplished was akin to removing the cornerstone of the edifice of knowledge. The "education crisis" we have experienced ever since has merely been the sound of that edifice crashing. Having nothing of comparable substance with which to replace it, the reformers opened the entire enterprise to the merry-go-round of vocationalism, politicization, and endless pop-psychological tinkering.

Those seeking quick policy solutions will not find them in this book. For an edifice—easily torn down—is difficult to rebuild and must be put back together slowly, piece by piece. What Ravitch has provided is a first step toward any solution, which is to understand where we are and how we got here. In this sense, she has performed a service few historians have equaled.