How To Merge Facts and Stories To Persuade

Examples from the coronavirus overreach 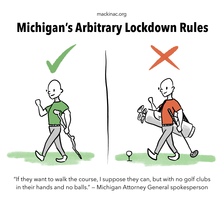 Everyone likes to have data and facts on their side, but people are more likely to be moved by stories and narratives. The Mackinac Center is always trying to use both data and stories when presenting information. The best, and most persuasive, journalism typically includes both.

This approach has influenced how we have covered the issue of COVID-19 and the governor’s executive orders through our news service. We have used “news bites” — short pieces from our news service Michigan Capitol Confidential — to present the data. We have also used cartoons to make the emotional point. And many of our articles weave the emotional stories of real people and businesses with facts rarely found anywhere else.

This has been particularly true in our coronavirus coverage. This is a serious issue which has caused a lot of harm. But the government’s response has also caused a lot of harm — to people’s health (by shutting down medical facilities), the economy and the education system. Our coverage of the issue gave people more than the shallow information they exploring trade-offs and showing the results of the state’s response.

Our cartoons pointed out the nonsensical nature of many of the governor’s arbitrary and overly restrictive executive orders. Like allowing boating, as long as it didn’t use a motor; walking, but not with golf clubs; letting auto repair shops to do business, but not bicycle repair shops; letting landscapers work, but not roofers; allowing chiropractors and dentists to work, but not barbers or hair stylists.

Our news bites hammered the points with facts and figures, digging out information from state reports on deaths, hospitalizations and employment. Here’s a recent example of a news bite:

Whitmer Extends Emergency Even As Hospital Occupancy Rates Back To Normal

Gov. Gretchen Whitmer says she will extend the State of Emergency she declared in March through the end of July and likely longer, according to the Detroit Free Press.

“This crisis is not over,” Whitmer said June 17 at her press conference.

When she declared the COVID-19 epidemic state of emergency on March 10 Whitmer said: “Ultimately these recommendations are about slowing the spread of the disease to ensure that medical facilities have adequate staffing and resources for vulnerable populations and those who are sick.”

The “staffed bed” occupancy rate in the state’s hospitals was 66% as of June 15.

That’s in line with the levels Michigan’s hospitals have experienced in normal times over the past decades.

Using more than one way to cover the pandemic and the government’s response has paid off: Michigan Capitol Confidential is having its best year ever, and millions have read these articles and seen the cartoons. Our news website has been widely cited and the cartoon series is a finalist for a national award.

Facts and stories. Together, they can paint a powerful message that persuades.