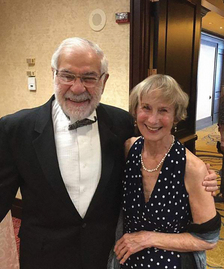 Dr. Lou and Mary Jane Zako of Harbor Springs, Michigan, have become ardent supporters of the Mackinac Center for Public Policy in recent years, after following its work from its inception. They have watched closely as the Mackinac Center expanded its reach and influence beyond the borders of Michigan, growing from a state-based think tank exclusively focused on Michigan to one with a national impact.

Dr. Lou and Mary Jane both have had long careers in the medical field, she as a nurse practitioner and he as a family physician. They value the importance of a high-quality education and a strong family life and believe those two factors played integral roles in their professional success.

Dr. Lou grew up in Detroit, the son of Syrian Christians who had emigrated from southern Turkey out of fear of religious persecution. He was the first of his immediate family to be born a U.S. citizen. His parents and grandparents understood the value of freedom and the opportunities they had here in the United States, and they passed on to him a love of country that he treasures to this day. His life as a first-generation immigrant success story is rooted in the freedoms we hold dear. But so is the story of Mary Jane, who grew up in the small town of Keego Harbor, Michigan, with working-class parents and a 50-student high school class. Her father joined the United States Army around the time of World War I and later worked as a supervisor in the local foundry that supported the automobile industry. Her mom was a homemaker for most of Mary Jane’s life, and both parents passed on the same love of country Dr. Lou received from his parents. The Zakos met at the University of Michigan and have very fond memories of their time together there.

Both Dr. Lou and Mary Jane are products of the public education system, all the way from grammar school through college. Thinking back on their experience with high-quality education makes them disappointed and horrified by public education most Michiganders receive today. That is one of the reasons they invest in the Mackinac Center, knowing that the policy team is actively working to expand school choice for the most disadvantaged among us. They also appreciate that Michigan Capitol Confidential is diligent to expose and hold accountable the teachers unions and school districts that are failing today’s youth.

Perhaps inspired by the work of CapCon, Dr Lou has taken to blogging. He also been inspired by his son, who encouraged him to channel his passion for Michigan and his country into writing, even though the two of them do not always see eye to eye on politics or policy. Dr. Lou’s blog now has readers from all over the world. One of his stories this year was about Sarah Huff, the Holland, Michigan, hairstylist who ultimately became a client of the Mackinac Center Legal Foundation (See page 9).

The Zakos have been particularly impressed by the work of CapCon through its coverage of COVID-19. They have long passed CapCon stories onto their friends and now see those friends share those stories within their own social circles. They share a sense of pride in seeing how much the Mackinac Center has grown in recent years and has had a positive impact on the lives of Michiganders and people all over the country through My Pay My Say and Workers for Opportunity projects, two projects for worker freedom.

In their view, the Mackinac Center for Public Policy is a star in several ways. One, they love that it is a state-based think tank. Two, they say it is big enough to have the resources to be effective and have a national impact, while not losing touch with its supporters. Finally, they take pride in the Center’s work in uncovering the dues-skim that took money from health aides. It is for these reasons and many others that the Zakos are members of the Mackinac Center Legacy Society.

They continue to be active members of the Harbor Springs community and spend about a quarter of their time in Vero Beach, Florida. Dr. Lou continues his practice by offering telemedicine from his home to patients in need. Most recently, he spent time as a physician at the PACE clinic in St. Joseph, Michigan, but he has also taken on 60-70 different physician assignments around the country through a staffing agency.

The Zakos are anxious yet hopeful for the future of Michigan and our country. They believe the best path forward for our youth is a good education and an intact family, for not all social problems can be solved in the public arena. Through their support of the Mackinac Center, the Zakos hope to ensure that the opportunities once available to them and their parents will be there for generations to come.