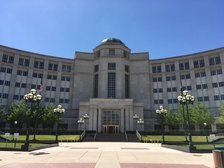 Before March, few people knew about the emergency powers Michigan governors possess. This seems incredible, now that Gov. Gretchen Whitmer is using these powers to control the lives of 10 million Michiganders. The events of this year have exposed a large problem with Michigan’s emergency power laws — one that calls into question the state’s constitutional requirement that executive, judicial and legislative powers remain separate.

Gov. Whitmer is not the first Michigan governor to use emergency powers. In fact, in 2019, she declared seven state emergencies. Those declarations were made under the Emergency Management Act of 1976, which previous governors relied on to declare emergencies and coordinate government services to aid in disaster relief after rainstorms, power outages, chemical spills and the like.

What is different in 2020 is that Gov. Whitmer is using both the 1976 act and an older law from 1945 that appears to grant the governor even broader emergency powers. She believes that the 1945 law — the Emergency Powers of Governor — enables her to determine unilaterally when an emergency begins and ends. This effectively means that the governor may issue edicts that have the force of law for however long she — and she alone — determines them necessary. No other Michigan governor has attempted this tactic before.

The state constitution requires a separation of powers, so there is a real question if those powers are distinct and separated if governors may become lawmakers whenever they choose. This is a question that the Michigan Supreme Court will consider later this year, prompted by a lawsuit filed by the Mackinac Center Legal Foundation.

But even if the courts make a clear ruling about governors’ use of emergency powers, questions will remain about how much power the state has over our day-to-day lives in the midst of a declared pandemic. In addition to the laws authorizing the governor to exercise emergency powers, other statutes in Michigan empower health officials, both local and at the state level, to issue orders to protect the public health at various times.

In fact, the Michigan Department of Health and Human Services has already issued its own emergency orders that reinforce Gov. Whitmer’s rules. Michiganders perhaps would have quarantine-like restrictions placed on them even if the governor could not use the 1945 act any longer. The only difference would be it was an unelected bureaucrat making the orders and not the state’s highest officeholder.

Clearly, a thorough review of Michigan’s emergency power laws and other quarantine-related rules is needed. The Mackinac Center is already working on crafting a better emergency system that lets the governor use executive power quickly, but also maintains a separation of powers. The novel coronavirus has taught many Michiganders a lesson that the Mackinac Center’s first president, Larry Reed, articulated: “A government that’s big enough to give you everything you want is big enough to take away everything you’ve got.”