Ending the 'Dues Skim' in Michigan

How the government was stopped from taking money from paychecks

Under the dues skim, Medicaid payments meant to aid the elderly and disabled were diverted to unions. In Michigan, $31,317,790.40 was taken by March 2012. The skim, which began in 2004, was not completely over until 2013. The end came after there had been legislation, multiple court cases, and a failed union effort to permit the skim via a constitutional amendment.

The skim continued in other states, however. In 2014, the U.S. Supreme Court held in Harris v. Quinn that charging home-help workers agency fees was unconstitutional. Unions, following a pattern they established in Michigan, have tried across the country to subvert that decision. A new federal rule based on a Mackinac Center idea is the latest chapter in this story. It aims to end these union efforts by making it illegal for Medicaid payments to go to anyone other than the care recipient or his or her provider.

The dues skim was an effort by unions to increase their membership and revenue. Under it, they claimed that anyone whose clients received public aid was really doing governmental work and could be unionized as a governmental employee by public sector unions. Unionization then happened even though the employer was the person receiving care and the provider was a private person.

As explained in the Mackinac Center’s amicus brief in Harris v. Quinn, the dues skim began on the West Coast and eventually made its way across the country. In Michigan, the Granholm administration created a fake employer — the Michigan Quality Community Care Council — to give the unions a governmental entity to organize against. This entity was created surreptitiously so as not to be detected by the Legislature. An “election” then occurred, in which 8,000 of the 40,000 providers voted. That was enough for the Service Employees International Union, or SEIU, to be named as the collective bargaining agent for providers.

The Mackinac Center discovered and publicized the dues skim in various ways. A “skim tracker,” for example, appeared in articles Michigan Capitol Confidential published about the scheme. The Legislature ended the funding to the council, so the SEIU started to finance it, even as the council’s director collected unemployment insurance. In 2012, the Legislature also amended the public bargaining law to make it clear that such providers were not public employees who could be unionized. The unions then sued and also sought to amend Michigan’s constitution to permit the skim. The voters rejected this attempt. It was only a few months later that the skim ended.

Nationally, the unions have put up a similar fight after Harris v. Quinn. With the help of sympathetic state legislatures and executives, they continued to divert around $200 million in Medicaid funds, despite the Supreme Court’s decision. The new federal rule should stop these union work-arounds. No money will be skimmed and given to the union.

Perhaps not surprisingly, the state of California and some unions have filed a federal lawsuit seeking to overturn the rule. Thus, the national battle to finally end the dues skim will continue for now, but the Mackinac Center will continue to work to end this injustice, as we did in Michigan. 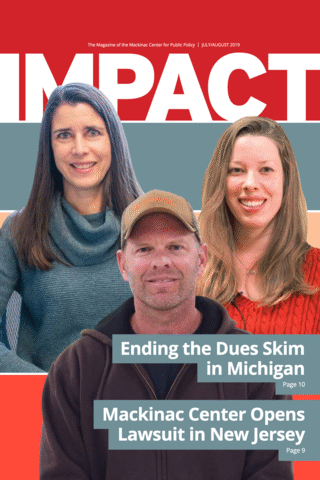