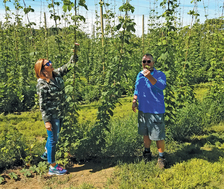 Family dinner conversations have become increasingly rare and often-dreaded social occasions in our modern world. This has not been the case for Mackinac Center supporters Todd and Stacey Taylor. Their adult children share their views on free-market issues of the day, something the Taylors attribute to encouraging the exchange of ideas and opinions at the dinner table as they raised their family.

Todd knew by his high school graduation that he wanted to be in business. His grandfather owned a business and his mother had a keen business mind. A free-market perspective was molded during his college years at Northwood University, where Larry Reed, who later served as the Mackinac Center’s president for 20 years, was one of his first professors. The Taylors acted on that perspective by giving to the Mackinac Center after they saw a different college they had enjoyed a connection with start to drift on matters of principle.

Before the Taylors began splitting their time between Naples, Florida, and Greenville, Michigan, Todd owned and operated a manufacturing company he started in his hometown. Upon retirement, he was looking for a passion that would keep him busy for 20 hours a week. He found that — and more hours than he bargained for —
at the site of a defunct country club in Greenville. The Taylors purchased the property in 2008 and were free to develop the land in 2011.

Montcalm County’s sandy, loamy soil and proximity to the 45th parallel make it a good place for hops farms. The growing season coincides nicely with the Taylor’s schedule, including the time they wish to spend in Florida. After others attempted to revive the old golf course, to no avail, the Taylors were excited to “go back to nature” with the farm.

There are approximately 16 acres of hops on the property, with the first parcels of land, known in the industry as “yards,” being planted 19 months ago. As perennials, hops live for up to 15 years but take three years to achieve a 100 percent yield. They will be ready for harvest by the end of August.

While the Taylors have only been actively engaged in this new endeavor for 18 months, they have already navigated what they view as overregulation. While they had long supported Mackinac Center ideas on the grounds of principle, they now have professional reasons as well. They have followed ideas such as regulatory capture and events like the Issues and Ideas “Beer Glut” panel (see page 18). Todd is quick to remind friends and partners that deregulation made the current industry they are a part of possible. The Taylors and the Mackinac Center would both like to see the state lower excise taxes and licensing fees for farmers and craft brewers in Michigan.

While many attributes make the Taylors unique supporters, their zest for life and eagerness to try new things at any stage in life are shared by many friends of the Mackinac Center. To learn more about how you can make an impact for liberty by joining the Mackinac Center in a philanthropic way, or request a dinner conversation of your own, you can reach us at (989)-631-0900.