Mark Janus is, in his own words, an average guy. He is still surprised that some people call him a hero and others call him a villain — and that hundreds of people gathered on the steps of the U.S. Supreme Court because of him. His name will likely end up in textbooks on American government, alongside Marbury v. Madison, Brown v. Board of Education and Loving v. Virginia. That’s something he never expected.

A child support worker from Illinois, Mark Janus is at the center of a legal challenge to the American Federation of State, County and Municipal Employees. He argues, through his representation from the National Right to Work Legal Defense Foundation and the Liberty Justice Center, that AFSCME violates his First Amendment rights. 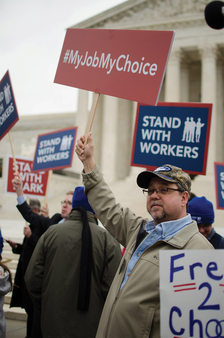 Terry Bowman, a former UAW member and founder of Union Conservatives, demonstrates his support of Mark Janus in front of the U.S. Supreme Court.

Unionized government employees in states without right-to-work, like Illinois, face a choice. They may join their union and pay dues, or they may leave their union and pay an agency or fair share fee. The fee costs slightly less than dues, and unions say it covers the cost of collective bargaining. Paying the fee is the only option for people like Janus, who disagree with their union’s political spending and action and wish to avoid subsidizing it.

But when a union bargains with the government, as AFSCME does, its actions are inherently political. It uses agency fees to negotiate against taxpayers and pursue goals in the political arena.

The Supreme Court heard arguments in the case on Feb. 26. It was a long day, as expected, with proponents of both sides arriving to stake out places in line and in front of the court as early as 3 a.m.

As attorneys presented oral arguments inside the court building, over 100 people rallied on its steps to support Janus. Countless current and former union employees spoke to the crowd.

Aaron Benner, a former public school teacher in Minnesota, shared how his union failed to support him when he ran against his school’s administration. Even more, he said, it actively worked to undermine him so it would have an easier time during the next contract negotiations.

Joseph Ocol shared how he was expelled from his union after he crossed picket lines during the Chicago teachers strike. He wanted to hold practice for the at-risk kids in his after-school chess club.

Rebecca Friedrichs also addressed the crowd, telling how her union chose to lay off three young teachers in her school. It did so even after she and her fellow educators agreed to take a pay cut to keep the three teachers. That choice angered the wrong woman, and Friedrichs took her case all the way to the Supreme Court, which left the matter unresolved after the death of Justice Antonin Scalia.

Supporters of liberty were not the only audience for these stories. Union members rallied right next door, holding signs with such ironic slogans as “It’s about Freedom!” and “Un-rig the system!”, both of which the Janus crowd joyfully co‑opted.

The outcome of the case is uncertain, but there is every reason for supporters of worker freedom to be optimistic. Thanks to the 4-4 decision the court issued in Friedrichs v. California Teachers Association, we know where eight of the justices stand. The newest member of the Court, Justice Neil Gorsuch, is the only unknown. He chose to keep silent during oral arguments, prompting intense analysis of his facial expression as he watched his fellow justices grill lawyers on both sides.

Because Janus v. AFSCME is so similar to the gridlocked Friedrichs case, a decision from the Court could come as soon as April — or as late as June 29. Whenever it is announced, a decision in favor of Mark Janus would only be the first step toward freedom for the millions of government workers across the country who are trapped in unions.