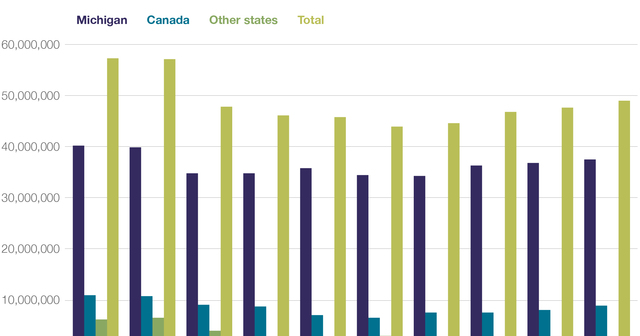 Up in the Dumps

Here’s a sign of economic growth that most people overlook: The landfill business in Michigan is booming. The amount of waste sent to landfills continues to grow from a low point in 2012. Though recycling policies may have an effect, industry insiders say the increase in waste disposal signals an improving economy.

Michigan’s Department of Environmental Quality reports a 3.1 percent increase in solid-waste disposals in the state’s landfills in 2016 over 2015, while trash imported from Canada and other states increased 7.5 percent. Waste disposal from Michigan businesses and households increased 1.8 percent from the previous year, according to the department’s “Report of Solid Waste Landfilled in Michigan for Fiscal Year 2016.”

“The uptick in municipal and commercial solid waste in Michigan the past several years is a sign of increased economic activity,” said Tom Horton, a spokesperson for Waste Management Inc. The Houston, Texas-based firm operates nearly half of Michigan’s 47 municipal and commercial waste landfill facilities. “Much of the increase in imported waste is attributable to construction and demolition.”

But the conclusion may understate the economic upswing, said Te-Yang Soong, vice president and principal engineer with CTI & Associates, Inc., an environmental, remediation and construction contractor headquartered in Novi. “That assessment may hold some element of truth since conventional wisdom suggests that landfills are the last to see the economic impact of a downturn, but the first to be positively impacted by an economic upswing,” he said.

“Undoubtedly, the availability of viable recycling options also has an impact on landfilling,” Soong continued. “It is unclear whether improvements in data collection may have also contributed to a perceived increase in waste volume. As most large manufacturing facilities and federal installations have adopted ‘Zero Waste’ and ‘Landfill Free’ practices, it is unlikely that significant and sustained increases in landfilled waste will be the norm.”

Capacity Shifts According to Need

At their current capacity, Michigan landfills can, on average, receive waste for another 27 years, up from 17 years projected in 2007. Horton explained that the state is only able to report what is currently reported and under a permit. He noted that landfill operators only request DEQ permits based on immediately projected needs rather than long-term forecasts. “Just like home builders only seek permits for the house they plan to construct in the coming year, landfill operators also make plans based specifically on what they need for the immediate future, making adjustments according to need,” said Horton.

Interstate trade in trash varies year to year according to contracts, fuel prices and tipping fees (the cost to unload trash at a landfill). For example, Wisconsin imported 10,000 tons of Michigan waste in 2014, which was down from 50,504 tons in 2009. By comparison, the Badger State imported 1.4 million tons of waste from Illinois in 2005 and only 76,000 tons in 2014.

There’s a Reason Recycling Has to be Mandated