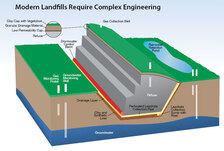 Gov. Jennifer Granholm and members of the Michigan Legislature are considering various regulations and taxes to discourage the importation of Canadian trash to Michigan landfills. We examine below the regulation of landfills in the state, their capacity and Michigan’s trash imports and exports to better assess policy options.

Modern landfills are among the most regulated industries nationwide. From site selection and design to construction and operation, landfills are managed to minimize environmental contamination and maximize reuse of sites in the briefest possible time. Waste companies presently invest between $750,000 and $1 million per landfill acre to comply with state and federal regulations. 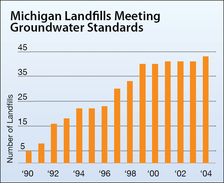 The Emergence of Landfill Regulation

Municipal garbage collection and disposal began in the 19th century, and largely consisted of horse-drawn wagons carrying solid waste to incinerators or to open dumps outside the city. Some waste was loaded onto barges for disposal at sea, while other municipalities used garbage to fill wetlands for construction.

By most accounts, the first modern American landfill was created in 1935 in California. While rudimentary by current standards, this landfill was an improvement over open-air dumps. In 1959, the American Society of Civil Engineers crafted landfill guidelines for municipal solid waste, including compacting waste and covering it with a layer of soil each day to reduce odors and control rodents.

The proliferation of landfills prompted Congress in 1965 to enact the Solid Waste Disposal Act. The statute imposed environmental standards on landfills, including a prohibition on the common practice of burning trash to preserve landfill capacity.[1] The Michigan Department of Natural Resources developed the state’s initial solid waste regulations. The Michigan Department of Environmental Quality initiated subsequent regulations.

The U.S. Environmental Protection Agency was granted federal authority over landfills in 1976, under the Resource Conservation and Recovery Act. Among the new regulations crafted by the agency were floodplain restrictions; surface and groundwater protections; insect, bird and rodent controls; and fire and noxious gas controls.

Additional rules were imposed in 1982 for control of "leachate" (water that acquires contaminants as it percolates through landfill waste). Thereafter, operators were required to equip new landfills with "liners" and a collection system to prevent gases and leachate from contaminating the air and groundwater.[2] By 1993, every Michigan landfill required to install a liner system had done so.

As the chart (see Chart A above) illustrates, the number of Michigan landfills meeting federal groundwater standards has steadily increased.

In the 1970s, there were more than 20,000 landfills in the United States. There are far fewer today, numbering 1,654[3], but they are more centrally located and larger than previous sites. Landfills handle about 131 million tons[4] of municipal solid waste disposed of in the United States, or more than half of the more than 236 million tons disposed of in 2003 (the most recent data).[5]

There are 50 landfills in Michigan that handle municipal solid waste. The average resident in the state produces more than four pounds of trash per day, most of which ends up in one of Michigan’s landfills. Statewide, more than 15 million tons of waste was generated in 2005.[6]

New deposits of solid waste are covered daily with six inches of soil or an alternative cover such as compost, ash, foam or tarps. These covers reduce odors, discourage rodents and keep trash from blowing away. Landfill waste sits atop a liner that is engineered to direct leachate to a collection pipe, then through a filter and drainage layer and into a collection layer. Landfill operators either treat the leachate onsite or transport the leachate to offsite treatment facilities. The leachate treatment must meet stringent federal and state discharge requirements.[7]

Landfills are also required to control emissions of noxious gases such as methane, which are produced by the decomposition of organic wastes. Some use flares that capture and combust the gases, while others use the gas to generate electricity.

At present, some 375 landfills nationwide convert methane to energy, according to the U.S. EPA. For example, Allied Waste’s Ottawa County Farms Landfill in Coopersville, Mich., processes 3,000 tons of solid waste daily, on average. About 50 percent of the landfill gas is methane, which is used for fuel by power generators such as the Ottawa Electric Generation Station.

The burned gas drives a generator that produces electricity. The electricity is sold to local utilities or other customers. There are 12 active gas recovery projects in Michigan, which produce an estimated 60.3 megawatts of electricity annually. Nationwide, nearly 74 billion cubic feet of landfill gas generates 9 billion kilowatt-hours of electricity per year, which is equivalent to the electricity produced by more than 154 million barrels of oil.

Methane from landfills also is transported via pipeline to processing facilities that forward the processed gas to nearby factories.[8]

The existing capacity of Michigan landfills is estimated to be 17 years, on average, according to documents filed with the Michigan Department of Environmental Quality.[10] Some landfills in the state could remain open for as many as 100 years if current disposal volumes remain constant.[11]

Industry analysts say new technologies are significantly extending existing capacity. For example, bioreactor processes add liquids and/or air to solid waste to accelerate decomposition. The reduction in the mass and volume of garbage creates more landfill capacity. Moreover, accelerated decomposition can dramatically cut the time before the landfill area can be reused — from 30 years to 10 or 15 years.[12]

"New designs, engineering and operational changes over the past 10 to 15 years have improved landfill space efficiencies," said Paul Sgriccia, solid waste manager of Golder Associates in Wixom. "Better design of landfills, including increasing landfill air space by constructing perimeter berms, and operational changes, including heavier equipment and advancements in increasing in-place waste density, are adding years of capacity to our existing landfills."

Smiths Creek Landfill in St. Clair County is one of the first Michigan landfills to test a bioreactor. State legislation passed in 2005 allows Smiths Creek to pump septic liquid from residential septic tanks into the landfill to make the garbage decompose up to 10 times faster, according to Dr. Te-Yang Soong, director of solid waste services for CTI Associates in Brighton.

As Dr. Soong explained, "Residential septage contains approximately 95 percent water and 5 percent solids. A portion of the septage solids consists of organic materials such as microorganisms that are capable of decomposing solid waste. Septage also contains large quantities of phosphorous, which is one of the essential nutrients for biological activities that maintain the pH-level in a biosystem."

When a landfill reaches capacity, it is sealed with groundcover and, within time, reclaimed for one of three categories of uses created by the National Solid Wastes Management Association.

Michigan’s Imports and Exports of Trash

Canadian trash imports to Michigan peaked in 2003, with daily shipments averaging 140 truckloads, each carrying between 33 tons and 52 tons of solid waste.[14] Currently, metropolitan Toronto ships between 80 and 90 trucks per day to one of the eight Michigan landfills with Canadian contracts. The decline in shipments is forecast to continue in coming years.

Toronto officials expect trash imports to decrease to 35 truckloads per day by 2010 due to the government purchase of a landfill in Ontario’s Elgin County. Although Toronto intends to honor its contracts with Michigan landfills, which expire in 2010, the contracts allow for the immediate diversion of as much as 50,000 metric tons of waste per year to the Ontario landfill.

Most of this hazardous waste requires additional treatment before it can be placed in landfills. For example, some medical waste is incinerated while low-level radioactive waste typically is allowed to degrade under controlled conditions before being shipped.

Several additional charts and pictures are available for viewing related to this article by clicking on either of the two pictures at the top of this page.

Waste disposal has evolved from the toxic dumps of yesteryear to today’s high-tech facilities in a relatively short time. New waste treatment methods have decreased the number of landfills while increasing the capacity of those that remain. These factors have rendered the disposal of solid waste cleaner and less costly.


For a complete list of Michigan Municipal Solid Waste Landfills, amounts of trash disposed in and the remaining years of capacity for each facility, please click here.

[2] These liners are typically comprised of compacted clay, often combined with high-density polyethylene.

[4] According to the MDEQ, 1 ton is roughly equal to 3 cubic yards. Because the compaction of solid waste varies according to shipping requirements, we opt in this article to use the more precise unit measurement in each instance cited.

[5] "Modern Landfills: A Far Cry from the Past," National Solid Wastes Management Association. Available on the World Wide Web at http://wastec.isproductions.net/webmodules/webarticles/articlefiles/ 478-white%20paper%20landfill%20final.pdf.

[7] "Modern Landfills: A Far Cry from the Past," National Solid Wastes Management Association. Available on the World Wide Web at http://wastec.isproductions.net/webmodules/webarticles/articlefiles/ 478-white%20paper%20landfill%20final.pdf.

[8] Readers are directed to MichiganScience No. 1, "The Trade-offs of Renewable Energy." For more information on landfill gas conversion to electricity, see the Ann Arbor Hands-On Museum’s Waste to Watts exhibit in this issue’s Field Trips.

[12] "Modern Landfills: A Far Cry from the Past," National Solid Wastes Management Association. Available on the World Wide Web at http://wastec.isproductions.net/webmodules/webarticles/articlefiles/ 478-white%20paper%20landfill%20final.pdf.

[14] The variation in the waste volume per truck reflects the differences in landfill contracts.

[15] Michigan Department of Environmental Quality, "2005 Hazardous Waste Quantities in Michigan," May 8, 2006, internal memorandum (not available on the World Wide Web). 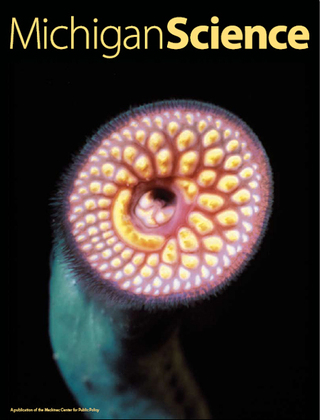