End mandated union membership and financial support by enacting a federal or state right-to-work law. Relieve unions of any duty to represent non-members and end forced collection of union dues from them.

As American society prepares to enter the next millennium, the watchword for real labor reform must be "freedom," both as an ideal and as a method of operation. Ending the coercive requirements of compulsory unionism and confiscatory union dues collection are essential goals.

Accordingly, in the absence of congressional action, the Michigan Legislature should enact a state right-to-work law which establishes in labor law the principle of voluntary association for workers.

The principle of freedom of association, guaranteed in the First Amendment, was a central tenet in the policy of union pioneer Samuel Gompers. Unfortunately, the labor movement has drifted away from the Gompers principle. Today in most states, when a union gets a mere simple majority of the votes in a representation election, all the workers can then be compelled to financially support the union and are subject to discharge if they fail to do so. This simply puts too much power in the union officials' hands, both in relation to the employee and the employer.

Once employees can exercise freedom of choice regarding union membership and financial support, unions should be legally free to represent the interests of only those employees who voluntarily choose to join a union. This would relieve unions of the legal duty to represent all employees, regardless of whether or not they are union members, and eliminate the so-called "free rider" dilemma. Unions would then have the incentive to focus on providing valuable employment services to attract the voluntary support of each worker.

A national right-to-work law, stressed economist and Nobel Laureate F. A. Hayek in his book, The Constitution of Liberty, is "the only practicable way of restoring the principle of freedom" to American labor relations. 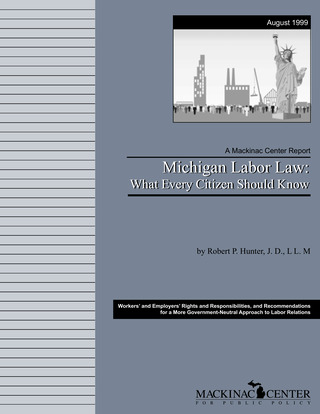