The statute governing the 21st Century Jobs Fund mandates that the program report annually on its actions. For instance, the grants and loans programs must report on the grant amounts and results, including a list of new patents, copyrights and trademarks, and economic impacts, like the number of new jobs and dollars spent on investments. This seems like fairly straightforward information to report, but, unfortunately, the results of those activities — arguably the most important information of all — are inconsistently reported or not reported at all.

The state required reporting under its initial legislation, though this was recently replaced as part of a consolidated report.[74] The original statute required some of the basic disclosures, including the names of entities receiving funding and the amount they received, both the projected jobs and “number of new jobs” created by the programs.[75] The updated statutory reporting requirements include the “amount and type of financial assistance,” the “duration of the financial assistance,” the “status of all loans of the fund,” “the actual number of new jobs created that are not temporary employees” and “the actual number of retained jobs that are not temporary employees,” among other things.[76] It further specifies that the report will also contain information on the investments of the 21st Century Jobs Fund.[77]

As seen in the Graphic 1, the figures that have been reported by the 21st Century Jobs Fund programs are inconsistent and the state is not meeting its statutory disclosure requirements. Even though details about the awards and loans handed out through most programs are listed, many of them are not comprehensive. For instance, the Retention of Pfizer Assets program lists only $4.3 million of its awards, even though the program gave out $8 million worth of awards.[78] Similarly, the Competitive Edge and Technology Grants and Loans program reports awards made and also money that was returned (possibly because a company failed to meet the terms of their award agreement), but the report only includes a portion of the grants and loans awarded through the life of this program.[79]

Jobs are not reported in five of the programs, and when jobs are reported, they are done so inconsistently. For example, “jobs” are defined in five different ways. Total spending — grants, loans, investments and other transfers — is also not included in the reports on a consistent basis. The individual recipients of state assistance are not disclosed in nine 21st Century Jobs Fund programs.[80]

The value of the assistance given from the state to individual recipients is rarely included in the reports. For the lending program, there are no records of payment histories in any of the programs. For lending support programs, no detailed information is provided concerning the status of this support — whether, for example, the state’s security has been tapped or when payments from the state to the companies has occurred. This is further complicated by the numerous amendments to the awards that may be added on after the initial award has been granted.

And sometimes, reporting on entire programs are simply left out of these annual reports. For example, the Centers of Energy Excellence program has been completely expunged from recent reports. The last it was mentioned was in the 2013 report.[81] 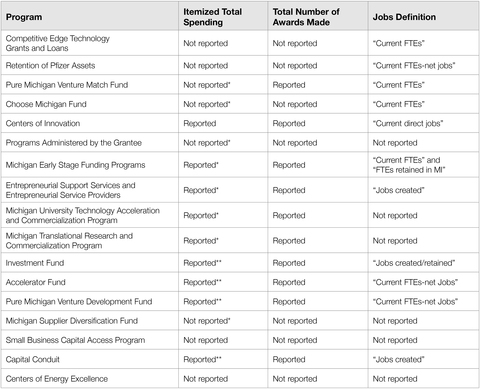 * Only the size of approved awards are reported. In some cases, it is not possible to tell with certainty whether these awarded amounts have actually been spent.
** Awards are reported as “Amount Committed” and actual receipts are reported as “Capital Called for Investment.”
Source: “Michigan Strategic Fund Act Annual Report to the Legislature” (Michigan Economic Developement Corporation, 2016), https://perma.cc/A92V-VAMW.

In addition, while the statutory guidance for the 21st Century Jobs Fund requires each project to be reported upon, closed or completed projects of certain funds have been expunged from the reports. The 2015 legislative report lists just 22 projects from the Competitive Edge Technology Grants and Loan program, a minority of the total number of projects these programs funded.[82]

This is especially odd because this report is meant to provide a snapshot of the current state of funded projects and not a comparison of the activities that took place between reports. It should give the results of the program in its entirety, not just those projects that are still active. In fact, both the previous reporting requirements and the current version require information on all entities that “received financial assistance” and provide no guidance for removing this data from the reports. Valuable reporting information would give a glimpse of the total results of the program so that its overall efficiency can be assessed. Unfortunately, this type of assessment is not possible given the limited information reported.

Even when figures are reported, there is a question about their accuracy. In scanning MSF Board meeting minutes, sometimes projects are mentioned that are never included in any of the reporting. For instance, the MSF Board amended a “supplier diversification award” to Production Engineering in its December 16, 2009 meeting.[83] This company is not mentioned in any of the 21st Century Jobs Fund’s annual legislative reports.

Reporting issues have been a recurring problem for these 21st Century Jobs Fund programs. Audits conducted in 2010 and 2013 both pointed out that the MSF needed to improve the consistency and thoroughness of its reporting. Specifically, the 2013 audit noted that the 2011 report on the 21st Century Jobs Fund did not include its Accelerator Fund, even though this program made awards in 2010. The state responded that this was an “oversight.”[84] Later reports corrected this, though the Accelerator Fund does not list the individual businesses that received state money via these venture capital firms — it only lists the names of the venture capital firms themselves.[85]

The reporting problem is not one of lack of information — these projects generate a substantial amount of paperwork. The 2010 audit remarked that the process of subsidizing select businesses generates hundreds of progress reports, site visits and milestone achievements.[86] Yet these are unpublished or not organized in such a way as to allow publishing. The report on the program’s activities provides scarce information about the results of the programs, and the auditor general has highlighted this substandard level of reporting multiple times.[87]

Basic transparency of its activities would require a report on what was awarded to each project, what was received, and the jobs and investment the spending produced. For programs where the state secures lending to a company with pledges of taxpayer support, a record of whether the state’s assistance has been tapped should be recorded.