The state government expenditures on economic development activities are a different sort of expenditures from its typical service provisions. The goal of corrections spending, for instance, is to administer justice. That spending has economic impacts nevertheless. Spending on economic development should show direct results from the program’s impact on the economy of the state.

According to the legislation that created the 21st Century Jobs Fund, the goal of spending these hundreds of millions of dollars was to “diversify the economy of this state, encourage long-term economic growth and full employment, and create jobs.”[88] The progress towards this goal should be relatively easy to measure.

Economic growth is not secret — there are monthly reports on employment and unemployment, quarterly reports on personal income, annual reports on state gross domestic product and dozens of other economic indicators. Michigan’s economy is difficult to hide, and government statistical services provide information on employment, income and production and can be used with the program’s stated effects to see if it has large impacts on the economy.

In light of those stated intentions, the total amount of economic activity — all of the investment, consumption, governmental activities in the state was $4.5 trillion from 2005 to 2015.[89] The 2015 report to the Legislature indicates that all the 21st Century Jobs Fund programs combined invested, awarded or leveraged $4.85 billion.[*] Thus, total investments — even making the questionable assumption that none of these projects would have occurred without state support — represent 0.08 percent of the state’s total economic activity over the period.

The jobs claims again show the relatively small impact of the 21st Century Jobs Fund program. Its latest report says that there are 6,549.3 jobs because of projects receiving assistance from the 21st Century Jobs Fund, but this amounts to just 0.15 percent of total employment in Michigan.[†] If all the jobs created in Michigan from 2006 to 2015 are considered, the program accounts for less than 0.08 percent of the job creation since its inception.[90]

While the companies who received state aid through the 21st Century Jobs Fund were positively impacted by this program, in the context of entire Michigan economy, it’s hard to argue that anyone else has really benefitted in any tangible way, because the impact of the program amounts to a microscopic fraction of the state’s total economy. Even if the program only made good investment decisions and created a positive return on investment, the 21st Century Jobs Fund program is never going to have a sizable impact on the state’s economy as a whole.

Unfortunately, due to the lack of performance benchmarks and inconsistent and incomplete reporting, it is difficult to measure the actual effectiveness of the 21st Century Jobs Fund programs in any more detail. For instance, it is difficult to tell the level of economic growth that was envisioned by policymakers when designing the program. Gov. Granholm desired that this program would “create 72,000 jobs,” but this goal is not necessarily as straightforward as it appears.[91] It could be calling for a net increase in employment levels. It could be an increase in the normal amount of job creation going on in the state. Or it could be the number of jobs performed at business projects that received assistance from 21st Century Jobs Fund programs. Even assuming a straightforward calculation of what “jobs” this goal was meant to count, based on the most recent report of the program, it’s less than 10 percent of the way towards this goal of 72,000 jobs.

The differences between these three measures — net job creation, gross job addition, and verified job creation from the program — are important. Michigan’s economy is dynamic; it is continuously adding jobs and eliminating jobs. Data from the Bureau of Labor Statistics pegs the figures at around 200,000 jobs gained and lost each quarter.[‡] The graphic below shows these trends over time and in more detail. 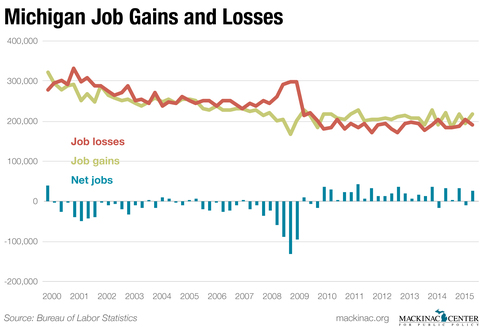 A net job creation of 72,000 jobs would have added 1.6 percent to total employment in 2005.[92] However, the impact of just 72,000 jobs over the long term — over the course of the 10-year history of the program — amounts to much less. While it may increase some of the job gains figures, it does not have a meaningful impact on net job growth, limited simply by its size and scope compared to the large and dynamic state economy.

The state auditor general also expressed some caution over reporting of job and development goals. A 2013 audit remarked that “[The Michigan Strategic Fund] did not consistently ensure that recipients were in compliance with grant or contract provisions. As a result, MSF could have disbursed funds for grants or contracts that did not achieve the desired economic development goals.”[96]

The money used in the programs of the 21st Century Jobs Fund indeed could have been used for other governmental purposes. Consider that the state could have paid down unfunded liabilities in the school retirement system. The state has promised $26.7 billion more in school employee pensions than it has saved.[97] The retirement benefits are constitutionally protected and represent a failure of the state to adequately set aside enough money to pay for pensions as they were earned. Had the state put the money it spent on the 21st Century Jobs Fund programs in the pension system and received the same returns as the other investments in the fund, the state would be $1.2 billion closer to meeting its promises.[98]

Consider also that the 21st Century Jobs Fund programs did not accomplish its goals. As noted, reporting on jobs is scant and inconsistent. It is not clear that investing this money in the pension system would have provided smaller economic returns than spending it on economic development. And it would have better served the state’s required functions.

Or instead of giving money to targeted industries, the state could also have used tobacco revenues to increase general fund support for other government programs. This may have reduced pressure on the state’s budget, where there is a constant demand for extra money for a number of programs. And while $75 million per year is a small figure compared to the $30 billion in state tax revenues spent in the state budget, it could also be turned over to taxpayers in the form of tax rate reductions.

Perhaps there are other goals not stated in the legislation or mentioned by policymakers. For instance, perhaps this was to boost the state’s stature with venture capital and other financers of high-risk investments. If so, such reputational goals are not measured or reported on.

[*] The failure to provide adequate and consistent reporting on the programs means that this figure should be given as a best-guess estimate about the program impacts. In addition, it appears that some of the activities of the fund through its history were not included in its most recent report, which may increase the total level of investments. “Michigan Strategic Fund Act Annual Report to the Legislature” (Michigan Economic Developement Corporation, 2016), https://perma.cc/A92V-VAMW.

[†] The failure to provide adequate and consistent reporting on the programs means that this figure should be given as a best-guess estimate about the program impacts. In addition, it appears that some of the activities of the fund through its history were not included in its most recent report, which may increase the total level of investments. Author’s calculations based on “Michigan Strategic Fund Act Annual Report to the Legislature” (Michigan Economic Developement Corporation, 2016), https://perma.cc/A92V-VAMW; “State and Area Employment, Hours, and Earnings” (Bureau of Labor Statistics, Aug. 18, 2016), https://perma.cc/56TY-KDS4.