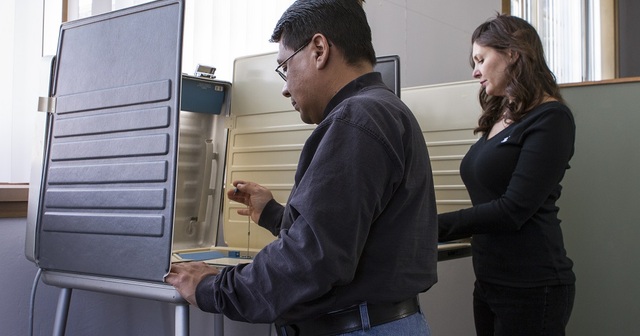 Ballot selfies are still prohibited in Michigan, for now

Michigan’s ban on “ballot selfies” — photos that voters take of themselves and their ballots in the voting booth — was lifted for four days last week before the Sixth Circuit Court of Appeals stepped in and put it back into effect, for now.

The brief reprieve occurred after a decision in a lawsuit filed by a Portage man, Joel Crookston, against the Secretary of State. In 2012, Crookston published a Facebook post that featured a photo he had taken of his ballot, where he had written in a friend’s name.

Though he didn’t realize it until later, Crookston had broken a 125-year-old Michigan law that forbids voters to show their marked ballots to anyone. He also learned that his plans to post a 2016 ballot selfie would be frustrated — recording devices have been banned at Michigan polling places since 2014, and the votes of those who take selfies are not counted.

But four days later, the Sixth Circuit Court of Appeals voted to stay Neff’s ruling at the request of state officials, putting her decision on hold until after the election. “With just ten days before the November 2016 election,” the opinion says, “we will not … suddenly alter Michigan’s venerable voting protocols, especially when [Crookston] could have filed this lawsuit long ago.”

So for now, the selfie ban remains in place. Secretary of State Ruth Johnson says that’s good because it saves local clerks from having to train elections workers on new rules right before the election.

Backers of the ban also argue that the prohibition doesn’t prevent voters from sharing how they voted with anyone they like once they’ve left the polling place. They also say that the ban would make it harder for people to pressure others into proving how they voted. Moreover, proponents say, allowing photography could result in such long waits at polling places that some would-be electors might leave without voting at all.

Sixth Circuit Chief Judge Cole is on the pro-selfie side, writing in his dissent to the stay that the ban puts voters “in the position of choosing between their freedom of expression and their right to vote.” He notes that every other court that has considered selfie bans has found them unconstitutional and faults Secretary of State Johnson for putting administrative interests above citizens’ fundamental rights.

As Judge Cole notes, Crookston is ultimately likely to win, as he should. The secret ballot is an institution that is meant to serve citizens, not the government. It happens that these days many people prefer publicity to privacy. If voters want to publish their proof of participation in our democracy, the government should allow them to do so while maintaining privacy for those who don’t.