The State Claims ‘Pure Michigan’ is Worth Tens of Millions. It Isn’t.

Other Research does not validate MEDC’s secretive, no-bid contractor

In the past year, we have worked to produce a scholarly, readable and transparent study about state subsidized tourism promotion. Our goal was to measure statistically — and with publicly available data — any impact that the state’s highly touted Pure Michigan program has had on Michigan taxpayers. We found a negative one.

The state and its no-bid consultant, Longwoods International, come to the opposite conclusion. They claim Pure Michigan produces huge returns to taxpayer investments in the form of new tax revenue. The problem is neither party will explain with any precision how their figure is derived. When challenged about such claims, both the MEDC and Longwoods have pointed to other people’s research that allegedly confirms that Longwoods’ secretive technique is valid. The conclusions of that research, however, are questionable.

In a previous publication, we examined the first of these other evaluations, originally touted by then-vice president of the MEDC’s Travel Michigan office, George Zimmerman. Zimmerman now works for Longwoods. He pointed to a validation study from 2011 titled “Validation of Travel Michigan’s Rate of Return on Advertising Estimation System — A Case Study Approach” as evidence that claims made by Longwoods could be taken seriously. The contractor who was hired to perform this study was hired on a no-bid basis and is a former vice president of Longwoods. (See more on the validation study here.)

In correspondence with LaFaive, co-author of this essay, Longwoods’ founder and principle Bill Siegel also tried to validate his firm’s finding by pointing to other people’s work. He argued that after his firm had done an analysis of Colorado tourism subsidies, D.K. Shifflet and IHS Global Insight did their own analysis and both came to roughly the same conclusion. They agreed that a temporary end to tourism subsidies caused a large decline in tourism in Colorado. Longwoods reported a 30-percent drop in Colorado’s share of American tourism, and D.K. Shifflet appears to repeat that claim without attribution.

We question both reports’ conclusions. In our attempt to research the impact on tourism promotion subsidies on Colorado ourselves, we turned to publicly available data from the Bureau of Economic Analysis and the U.S. Travel Association. One of the authors (Hicks) constructed a regression analysis to measure the impact such spending would have on Colorado from 1974 through 2011 as measured by economic activity on the accommodations industry.

Hicks chose to examine the accommodations industry because it is the tourism-related sector most likely to see an impact from a rise in, or cut to, state promotion expenditures. The regression included an indicator (or “dummy”) variable in an attempt to measure any impact on Colorado’s suspension of tourism promotion subsidies from 1993 to 2000.

The result? We could not find any statistically significant impact to economic activity in Colorado’s accommodations industry from either the state’s promotional activities or the cessation of those activities. The regression’s output table is posted below. 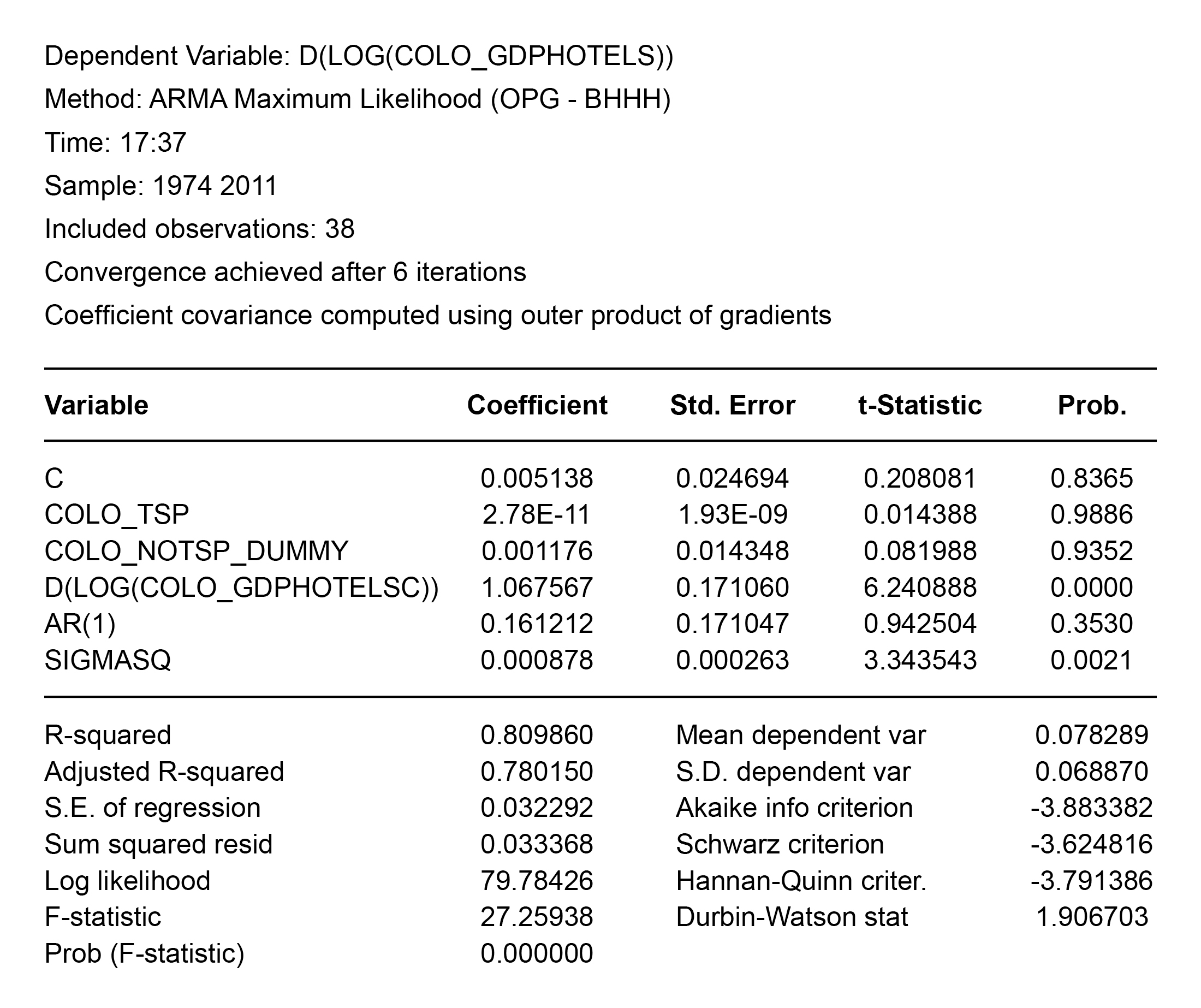 We have written extensively about how the MEDC hired Longwoods with an expectation that the firm would produce a study about Pure Michigan that would help the agency justify its budget. We also reported that Longwoods, on one of its own web page titled “Budget Justification,” bragged about how it had once helped state tourism officials in Colorado justify state tourism promotion spending.

Pure Michigan uses state revenue to buy ads intended to benefit the state tourism industry and by extension, the state economy. Our most recent research shows the program fails even at that, with the average state hotel or motel industry gaining just $20,000 in economic activity for every additional $1 million spent on state promotion.

It appears the only real beneficiaries of this program are the government officials paid to run it and the consultants paid to defend it. Lawmakers and the people they represent should be more than skeptical of the MEDC’s efforts to defend its funding stream for Pure Michigan.

Scholars are often criticized for discussing their findings in heavily qualified terms and not speaking plainly. As an antidote we offer the following, based on our research: Pure Michigan is a bust. It should be shut down and its funding repurposed to core government functions such as schools, roads, public safety and pensions for public employees.