Can Local Control and Equal Funding Be Reconciled? 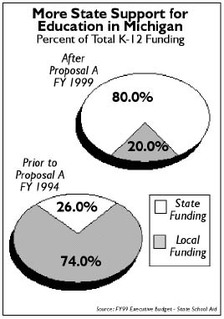 The coming controversy in the debate in education policy--actually, it's here already--will be over the matter of equal funding. In several states, the courts or legislatures have decided that it is unfair for communities with high-priced real estate to have better schools than communities with lower-priced real estate. Their solution is to have the state government dole out money to the school districts equally. That has upset people in the more affluent areas, but it cheers egalitarians everywhere.

In most states, government school districts are financed by taxes on the assessed value of the real estate in those districts. This naturally leads to disparities in school budgets. The schools in an affluent county usually have more money and nicer facilities than the schools in a poor county in the same state. Per-pupil spending is often higher among the rich than among the poor. Some people think that is unfair and have done something about it. In Vermont and elsewhere, the state courts have said the practice is illegal and has to stop. As a result, in some states the revenues from property taxes are sent to the state capitals, where they are then distributed among the states' school districts on an equal per-pupil basis. That, in turn, has upset some wealthy people, notably author John Irving in Vermont, who believe that court-ordered cross-subsidies nullify their decisions to buy homes in "better" school districts. In at least one state, Michigan, the property tax has been replaced almost entirely as a school-funding source by the sales tax, which is collected and distributed relatively evenly by the state government.

This seems to be an irreconcilable conflict that will engender increasing bitterness in years to come. Let's look at each side. The egalitarians argue that state constitutions hold, and most people believe, that every child has a right to a good education. If we accept the principle for argument's sake, can gross disparities in the quality of public schooling be justified? That would seem to conflict with the egalitarian premise of public schools.

To the egalitarian argument, the pro-public-school opponents of equalization would reply that the United States has a tradition of local control of schools and that their communities ought to be able to spend as much as they want on their children's education without having limits imposed by the needs of other communities. Irving said the new Vermont policy smacks of Marxism, and he has started his own school to avoid the policy.

As Oliver Hardy might have said: Well, government, this is another fine mess you've gotten us into.

This is what comes of government's declaring bogus rights. In truth, no one has a right to have his children educated at the expense of someone else. Rights identify the peaceful actions people may take free of interference by government and others. The right to have education paid for by the taxpayers is a contradiction, since it entails the forcible taking of money from citizens who are just minding their own business. Everyone has a right to educate his own kids, and himself, but no one may compel others to contribute.

Once we clear away the phony right, the equalization problem disappears. Parents should be free to buy as much education for their children as they like, regardless of whether it is more or less than what their neighbors buy for their kids. There will be differences in education quality, as there are differences in the quality of shoes and clothing. (However, many successful people have modest formal educational backgrounds.)

But what about the poor? Two answers: First, if anyone thinks the government schools are educating the poor, they are not keeping up with the news. Second, before there was government education in the United States, everyone was poor by today's standards. Yet America had the most literate, dynamic, and enterprising society on earth.

The path to education is paved with freedom, not compulsory leveling.