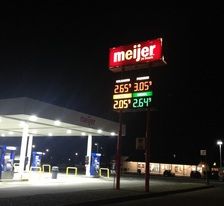 Gas stations have heavy competition. There are stations all over the place and everyone publicly displays their prices. Owners operate on very thin profit margins, and there is lots of incentive to keep prices as low as possible. Almost everyone uses gas and nobody likes paying higher prices. So when prices increase, politicians on both sides of the aisle demand and promise investigations. Oil companies are roundly demonized. (Of course, nobody is sending them a thank-you card when prices come down).

When it comes to crops, government bureaucrats take a different approach. When the price of products like corn, soybeans, sugar, cherries, and raisins is low, that’s good for consumers, but bad for some farmers. So the government price controllers step in, using old, inefficient laws to limit supply and drive up prices.

Some states go further. Michigan-headquartered Meijer opened two stores in Wisconsin and is now being investigated for its prices … being too low. A Depression-era law says items cannot be sold “below cost” — a restriction that costs the residents of the state tens of millions of dollars annually.

“This is a bit peculiar for us, we are not accustomed to regulations that limit our customers' ability to save money when they shop with us," said Frank Guglielmi, Meijer's director of communications, in an MLive report.

Public officials should spend less time interfering in the free market and more time focusing on ways to eliminate the monopolies that government mandates in education, alcohol, energy, electricity, unionization, law and more. That would actually help people.