Agricultural Price Controls are the Pits 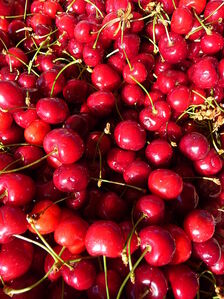 Ron French has a great article in Bridge Magazine looking at "the crazy economics of Michigan's favorite pitted fruit." The piece describes some of the federal cherry regulations that are mostly left over from the New Deal of the 1930s:

[T]he tart cherry industry is told by the U.S. government how much of their product they can put on the market. The Cherry Industry Administrative Board (CIAB), operating under the auspices of the Department of Agriculture (USDA), sets restrictions on the percentage of the tart cherry crop that can be sold. Some years the share of the market restricted from market is low, like this year, which has a 10 percent restriction. In 2009, it was a whopping 65 percent.

While central planners defend these policies as necessary to help manage the tart cherry market, there are few similar restrictions on other fruits and vegetable or other food. The market does a better job of setting prices than government bureaucrats.

The article is a refresher on what violating basic economic principles does to a sector of the economy: causes shortages and waste.

"Canned cherries … have a shelf life of about a year. So in a year with high restrictions … [companies] may have to import cherries for its pie filling, while cherries are rotting on the ground in orchards a few miles away," French wrote. He reported that in 2009, 30 million pounds of tart cherries were forced to be left in the ground.

That is the end result of price controls. The government is trying to force cherry prices to be high by lowering the supply. One farmer talks about people "literally dumping them alongside the road."

Unfortunately, the types of government controls were not unique but a central part of many New Deal programs. As Mackinac Center President Emeritus Larry Reed described in his essay, "Great Myths of the Great Depression":

Roosevelt secured passage of the Agricultural Adjustment Act, which levied a new tax on agricultural processors and used the revenue to supervise the wholesale destruction of valuable crops and cattle. Federal agents oversaw the ugly spectacle of perfectly good fields of cotton, wheat and corn being plowed under (the mules had to be convinced to trample the crops; they had been trained, of course, to walk between the rows).

Healthy cattle, sheep and pigs were slaughtered and buried in mass graves. Secretary of Agriculture Henry Wallace personally gave the order to slaughter 6 million baby pigs before they grew to full size. The administration also paid farmers for the first time for not working at all. Even if the AAA had helped farmers by curtailing supplies and raising prices, it could have done so only by hurting millions of others who had to pay those prices or make do with less to eat.

The bulk of the economic literature shows these policies to be extremely destructive and only politicians (and some Keynesians) could believe that destroying production is good for the economy.

It's unfortunate that some of these programs still live on.