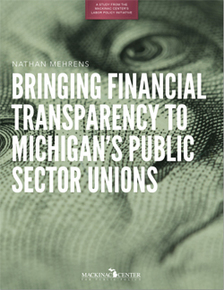 This study is available online at Mackinac.org/s2015-04.

Most public sector unions in Michigan are as transparent as a steel door. It’s nearly impossible for public employees in this state to get their hands on information about their unions’ finances — making it difficult to hold union officials responsible for how they spend members’ dues. The Mackinac Center released a new study that aims to be the first step in changing all of this and making government unions more fiscally responsible to their members.

The Mackinac Center couldn’t have found a better person to author this new study, titled “Bringing Financial Transparency to Michigan’s Public Sector Unions.” Nathan Mehrens is currently the president of the Americans for Limited Government Foundation, but before that he worked at the U.S. Department of Labor and helped implement the very union financial reporting requirements the study recommends bringing to Michigan. Former U.S. Secretary of Labor Elaine L. Chao, for whom Mehrens worked, wrote the foreword to the study.

This issue is about financial transparency and accountability, but it’s also about fairness. All private sector unions must adhere to robust financial reporting rules set by the federal government. These rules have been instrumental in discouraging and rooting out fiscal corruption by union officials. But public sector unions, because they are regulated by state law, face no such requirements. In Michigan, all they have to do is report spending in three broad and vague categories (and many don’t even do this!) — leaving their members in the dark about how good they are as stewards of their members’ money.

Mehrens makes a simple recommendation: Michigan lawmakers should enact financial reporting requirements that mirror those already being used by the federal government. This will finally allow public school teachers, state and county workers, and all other unionized public employees in Michigan a chance to determine if their union officials are working in their best interests, or if it’s time for new union officers.