Under current Michigan law, unions representing public employees are required to have “an independent examiner” review their finances.[*] The union then files a report, the “Union Audit Filing Coversheet,” with the Michigan Employment Relations Commission’s Bureau of Employment Relations.[29] MERC is then required to post this financial document on its website.[30]

The examiner verifies that the union has accurately allocated costs associated with collective bargaining, administering union contracts and handling employee grievances.[31] The form filed by Michigan public sector unions discloses just these three areas of expenditures for a particular union. There is no itemization of the people or entities to which disbursements for these activities occurred. While public sector union members have some assurance that the amounts disclosed on this form are correct given that these amounts must be verified by an independent examiner, the information disclosed certainly does not provide a “full accounting of all transactions involving their property” as would be required if they were covered by the LMRDA.

An example of an audit cover sheet filed by the Southwest Michigan Education Association for 2012 is below. 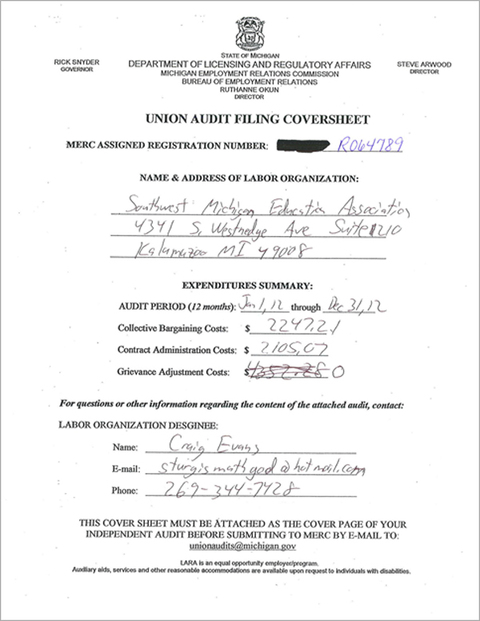 There are 564 reports available on the MERC website for fiscal year 2013.[32] Since most of the more than 540 school districts, 15 public universities, 83 counties and hundreds of other municipalities in Michigan have unions representing their public employees (many with more than one union), it is unlikely that these reports are available to every unionized public sector worker in Michigan.

[*] With some exceptions, “public employee” generally means “an individual holding a position by appointment or employment in the government of this state, in the government of 1 or more of the political subdivisions of this state, in the public school service, in a public or special district, in the service of an authority, commission, or board, or in any other branch of the public service.” MCL § 423.201(1)(e).