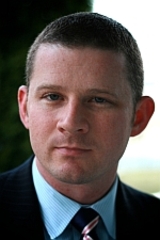 Nathan Mehrens is president of Americans for Limited Government Foundation. He previously served as ALGF's General Counsel. Before his service at ALGF, he was Special Assistant to the Deputy Assistant Secretary of Labor. He previously served as Director of Research and General Counsel for several nonprofit organizations that monitor and advocate on labor union issues.

At the Labor Department, Mehrens drafted many of the regulatory reforms that the department promulgated to increase labor union financial transparency, including regulations on the Form LM-2, Form T-1 and Form LM-30. He shepherded each of these through the approval process from beginning to end. Mehrens worked closely with the department’s career lawyers on enforcement matters in the areas of white-collar crime and labor union officer elections.

Mehrens has significant experience with the Freedom of Information Act. He manages ALGF’s FOIA program and has a history of bringing successful challenges when agencies attempt to withhold records. He has handled FOIA matters before every executive branch department and many of the independent agencies.

Mehrens is a frequent media commentator and has been quoted by The Wall Street Journal, the Washington Times, Fox News, Fox Business, the Daily Caller, the Washington Examiner and other media outlets.