Free Press should use better metric 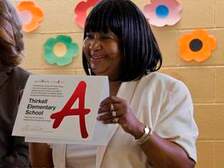 Clara Smith, the principal at Thirkell.

Just a year ago, the Detroit Free Press had high praise for Thirkell, an elementary school in the conventional Detroit Public Schools district.

Reporter Lori Higgins wrote that Thirkell was "defying the odds by posting strong proficiency rates on the MEAP..." Editorial Page Editor Stephen Henderson characterized Thirkell in a column as having an environment of "focus and consistency," with a "dynamic and skilled" principal.

However, in a week-long series, the Free Press has repeatedly criticized charter public schools that have received low rankings on the Michigan Department of Education's "Top-to-Bottom" list. In a recent article, Higgins and co-author, Kristi Tanner, pointed to Top-to-Bottom rankings as evidence of poor charter performance. In a Sunday column, Henderson pointed to those rankings as proof of a "charter school mess."

And on Thursday, reporter David Jesse reported that Hope Academy, a charter public school, scored dismally in 2012-13, ranked below 99 percent of Michigan schools.

The issue is not that Thirkell is a bad school. Indeed, in 2013, the Mackinac Center for Public Policy identified Thirkell as the highest-performing Michigan elementary or middle school in the state. We were thrilled to celebrate Thirkell and seven other DPS schools for posting impressive academic results. Several of those other DPS schools would also be considered failures under the Free Press' analysis.

Hope Academy, in comparison, ranks in the top 70 percent of Michigan elementary and middle schools when poverty is considered.

The Mackinac Center recognizes the academic impact that outside factors can have on schools, and so produces an annual report card that adjusts for student socioeconomic status. This report card's methodology has since been replicated by the Center for Michigan. These independent report cards grade schools on how well they perform given their unique student population — instead of their neighborhood struggles.

An outgrowth of the Mackinac Center's report card work was publishing a study in October that strongly criticized the state's Top-to-Bottom ranking. In that study, we showed that the state's Top-to-Bottom ranking was essentially a proxy for poverty, instead of a measure of actual school performance. In other words, schools like Thirkell were being unfairly penalized by the state, simply because they tend to serve more low-income students compared to other schools around the state.

In the wake of that finding, I argued in the pages of the Free Press that the state should change the way it grades schools. I noted that under state law, schools that receive low Top-to-Bottom rankings can be forced to fire their principals, or even be closed. This law has already triggered principal dismissal in some Michigan schools.

Though the Free Press is arguing for increased regulations to penalize what it characterizes as failing charter schools, the newspaper has yet to mention the penalties already imposed upon low-ranked schools anywhere in its coverage.

By using the Top-to-Bottom list in an attempt to show that Michigan charter schools are poor performing, the Free Press is missing the mark and ignoring its own past reporting on the limitations of relying too heavily on these state rankings.

There's clearly more to a school than its rank on a poorly designed state metric. Free Press reporters have demonstrated that they understand this when it comes to some schools. Should they give the same consideration to others, namely charter schools? Or has the Free Press changed its mind about Thirkell?