Michigan could look to other states for school ranking practices that have been approved by the federal government and that have less of a chance of penalizing schools for simply serving more disadvantaged students. Instead of measuring achievement gaps between the top- and bottom-scoring students, MDE should consider including the growth of lowest-scoring students as part of its report card, following the example of Florida, Arizona, Maine, Ohio and Oklahoma. As part of its research, the state could look for measures of test score growth that do not penalize schools that educate a large population of disadvantaged students. Arizona’s methodology should be examined, since it had the smallest correlation to school poverty levels.

The state could also consider incorporating consequences for low-scoring schools that provide students and parents with more choice instead of automatic, state-imposed penalties. In other words, instead of trying to figure out how to fix each individual low-scoring school, the state could empower parents to put the pressure on these schools to improve by making it easier for them to “vote with their feet” and enroll in another school of their choice.

Though the state does have to abide by federal requirements, other states, such as Florida, Ohio and Wisconsin have incorporated penalties for low-scoring schools that give parents a state-funded option to enroll in a different school, including private schools.

Michigan should consider such options within the limitations of its constitutional prohibition against private school choice.[39] The state could prioritize choice-based reforms by causing those reforms to apply to low-ranked schools immediately, while imposing longer delays before federal requirements take effect. Below are four such possibilities. 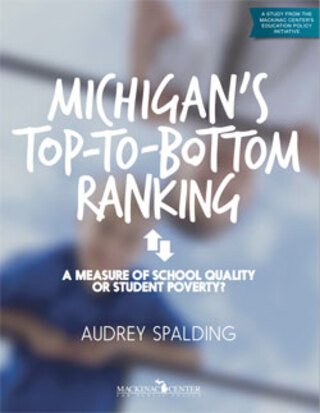