Oregon Study Suggests Michigan Medicaid Expansion Not Worth the Cost

While the Michigan Legislature debates expanding Medicaid, a new study says that doing so may not significantly improve health outcomes.

The study, "The Oregon Experiment," was published in the New England Journal of Medicine and measured several health areas, like blood pressure, glycated hemoglobin, cholesterol and depression. The report compared two groups of similar people: one group in the state's Medicaid program and another that was not enrolled in the state's Medicaid program. 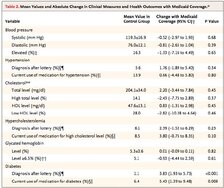 "We found no significant effect of Medicaid coverage on the prevalence or diagnosis of hypertension or high cholesterol levels or on the use of medication for these conditions," the study said. "Medicaid coverage significantly increased the probability of a diagnosis of diabetes and the use of diabetes medication, but we observed no significant effect on average glycated hemoglobin levels or on the percentage of participants with levels of 6.5 percent or higher."

The group found a few positive effects from Medicaid coverage, like lower stress levels and lower rates of depression.

"Today, the nation's top health economists released a study that throws a huge 'STOP' sign in front of Obamacare's Medicaid expansion," wrote Michael Cannon, director of health policy at the Cato Institute, in a blog post.

"There is no way to spin these results as anything but a rebuke to those who are pushing states to expand Medicaid," Cannon continued. "The Obama administration has been trying to convince states to throw more than a trillion additional taxpayer dollars at Medicaid by participating in the expansion, when the best-designed research available cannot find any evidence that it improves the physical health of enrollees."

Oregon provided a unique setting for the researchers because in 2008 the state provided money for 10,000 people to go on Medicaid. Since there were more applicants than spots available, the state held a lottery to decide who would be covered on the health care program. The study compared 6,400 of the people who went on the new program to 5,800 who had entered but not secured a spot.

The study is only the second large-scale randomized control trial done. The first was a report from the RAND Corporation done between 1971 and 1982 that also found limited positive results of detectable health effects.

The report also "did not find significant changes in visits to the emergency department or hospital admissions." This suggests that simply expanding Medicaid coverage does not mean health providers save money by making low-income citizens less likely to simply go to the emergency room.

Expanding Medicaid coverage to people up to 133 percent of the poverty line was mandated under the Affordable Care Act (more commonly known as "Obamacare"), but the Supreme Court ruled last year that the provision is optional. The federal government has pledged to pay 100 percent of the costs for the first few years, eventually dropping to 90 percent of the total. States around the country are currently debating whether or not to expand their programs.

Gov. Rick Snyder has proposed expanding Medicaid in Michigan which would add 470,000 people to the publicly funded program, his office estimates.

"The pro-expansion argument usually revolves around the piles of cash — from taxpayers in other states — that will redound to the particular state in question," said Avik Roy, a senior fellow at the Manhattan Institute, who recently was in Michigan speaking about Medicaid expansion. "But every state will still have to spend a considerable sum of its own money to sign onto the Medicaid expansion.

"At a time when middle-income Americans are themselves being squeezed by Obamacare's hikes to health insurance premiums, it is positively unethical to take money from them in order to fund a broken program that doesn't improve health outcomes," he said.

Rep. Tom Hooker, R-Byron Center, who sits on the Michigan House Health Policy Committee, said he had not seen the study, but the results do not surprise him.

"Just because someone knows they have health issues does not mean they are going to necessarily do something about it," he said.

Rep. Hooker said he would rather the state look at other ways to deal with health coverage as well as change the system for those already on Medicaid, like requiring a small co-pay.

"As far as the expansion, I am very, very, very hesitant," he said. "This is an expansion of an entitlement and I don't see myself supporting it at a time when the federal government is borrowing so much money."

Trust Not In Obamacare Medicaid Promises