No Place for Alarmism on Earth Day 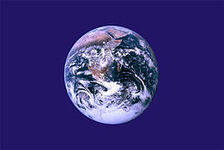 When the first Earth Day was celebrated in 1970, there was much cause for concern. From burning rivers and smog to the contaminated Lake Erie and trash-lined highways it seemed our environment was on the brink of complete devastation. At least it did to a young fifth grader who commemorated the inaugural Earth Day with his classmates by embedding nails to the bottoms of dowel rods to pick up litter throughout the small town where I grew up.

How far we’ve come since those days: the Clean Air and Clean Water acts, the advent of the catalytic converter and cleaner burning gasoline were among the immediate benefits of the new environmental consciousness that enlightened our country and state. Things turned around rapidly, and the anthropogenic toxins formerly spewed into the atmosphere and waterways of our great country abated significantly.

Mind you, there have been setbacks along the way as well. But no sooner had these backward steps been addressed than another, much larger problem was promulgated by certain scientists and their acolytes in both the media and politics: global warming or, as it’s been softened over the years, climate change.

Depending on which climate change believer you read, listened or talked to, the degree of warming caused by human activity was different but the anticipated results were usually catastrophic. Something, they said, needed to be done, something drastic. Indeed so drastic as to cripple the economic engines of the developed world.

Those who challenged the climate change crowd were subjected to ridicule, condescension, name calling and — when it turned out the skeptics might be gaining ground — criminal activity. What became increasingly clear was that there was no such thing as “scientific consensus,” nor could there be on a topic so complex.

But something happened over the past several years since catastrophic climate change was declared settled science. The New York Times recently folded its climate-change blog; The Economist, the London Telegraph and German newsmagazine Der Zeit have all walked back on their respective assertions that global warming was the single most troubling worldwide threat.

The most intellectually honest of those scientists who once warned about significant warming also have backtracked. London’s Daily Mail quotes Piers Forster, climate change professor at Leeds University: “Global surface temperatures have not risen in 15 years. They make the high estimates unlikely.” And this from Dr. David Whitehouse of the Global Warming Policy Foundation: “Global warming should no longer be the main determinant of economic or energy policy.” Finally, from Professor Judith Curry of the Georgia Institute of Technology: “Climate models are running too hot…current flat trend may continue for two more decades.”

Got that? Global average surface temperatures have not risen since 1997, and may not for the foreseeable future. The same goes for the oceans, which is where some scientists assumed all the heat they were predicting was concentrated. Except that it wasn’t.

Of course, none of the recent data conclusively proves or disproves whether climate change alarmists are completely correct or totally wrong, rendering it unseemly to gloat over their grave miscalculations of the past 15 or so years.

What these miscalculations hath wrought in bad public policy over the years, however, should anger each and every taxpayer in the country. This includes everything from bureaucratic overreach at the U.S. Environmental Protection Agency and the Michigan Department of Environmental Quality; massive taxpayer-funded boondoggles for solar and wind energy, electric cars; coal- and nuclear-energy plant moratoriums and ethanol mandates; and lengthy legislative debates over cap-and-trade schemes to waffling over hydraulic fracturing and the Keystone Pipeline.

Despite the best efforts, however, politicians and other warming alarmists have been stopped short before they could permanently apply the brakes to progress. As noted by David Gregory, research and policy analyst for The Cornwall Alliance:

Standard of living has risen everywhere across the planet and continues to rise. Total wealth is also up. The cost of almost everything is down relative to income, including even the cost of catastrophe. There has never been less hunger or disease. Nothing is likely to stop this trend—unless it’s environmentalism, particularly because it plugs high-cost, low-reliability “renewable” energy over low-cost, high-reliability fossil fuels and nuclear.

Various means of trying to limit energy have been proposed, from a carbon tax to total cessation of fossil fuel use. All limit economic development, crucial to standard of living, and with it human health and well being.

Let’s hope Earth has dodged the real threat to its inhabitants — the stagnating, regressive economics proposed by climate-change “solutions.” And let’s hope scientists and legislators think twice before sparking once again worldwide hysteria.