The Human Side of Right-to-Work Legislation

These are real people who have been hurt by forced unionization 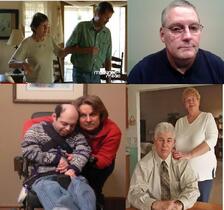 As Michigan gets closer to becoming a right-to-work state, the focus often is on economics. There are plenty of reasons to support worker freedom based on that alone, but we should always remember the most important aspect: Allowing members the choice of whether to financially support a political organization is a moral one.

In our state, right now, tens of thousands of people are being forced to send money to the Service Employees International Union, simply because they care for a friend or family member who receives a Medicaid stipend.

The SEIU has taken over $33 million from the elderly and disabled in Michigan in the last six years through a unionization scheme it orchestrated when Jennifer Granholm was governor. The majority of these people had no idea they were being forced into a union.

When the Michigan Legislature and Gov. Rick Snyder acted to end the scheme, the SEIU took legal action and then spent at least $6 million — money taken from those caregivers without their consent to use it for politics — to try and lock the dues skim into the state constitution: It failed.

Every newspaper in the state editorialized against Proposal 4. The Detroit Free Press called it "easy to dismiss" and The Detroit News said it was a "crass power grab."

Several families reached out to Michigan Capitol Confidential to tell their stories: The Haynes family, who look after their two adult children who have cerebral palsy; Steven Glossop, who looks after his mother who lives with medical complications following heart surgery and a stroke; the Milliron family, whose adult son Ronnie "cannot walk or talk and is like a 5-month old" needing to be spoon-fed; and Richard Nottage, who looked after his ex-wife for just a few weeks. All of those individuals had some sort of current or previous experience as union members outside of the SEIU.

If Michigan becomes a right-to-work state, no union could ever force a worker to pay dues or agency fees as a condition of employment, and unions would be forced to cater to their member's needs.

If you think this is only an economic debate, I encourage you to watch the Haynes family tell their story of forced unionization.