Union Electrician and Wife: 'The SEIU Never Did Anything For Us' 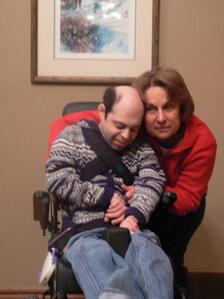 Geri Milliron and her son, Ronnie

Geri Milliron wasn't going to be bullied by the Service Employees International Union.

She's spent her life taking care of her son, Ronnie, and knew that the union could provide nothing to make his life better. So when she noticed that union dues were being deducted from the Medicaid dollars the family was getting to take care of their quadriplegic son, she took action.

Unlike the tens of thousands of others in Michigan who have been forced into the unionization scheme orchestrated by the SEIU when Jennifer Granholm was governor, Milliron got out.

“I’m not afraid to speak out and I did,” she said. “The SEIU never did anything for us and they can’t help any parents who take care of their kids. I’m not a union member, I’m a mother and I’m on the clock 24/7.”

The Macomb Township mom said she was forced into the SEIU in 2006 and for two years had about $20 a month taken from her family by the union. She said she never got a ballot to vote for unionization and never got any information from the SEIU after the mail-in election.

“But I saw that some union was taking money from us and I started asking questions,” she said.

She fought back by going to Lansing to get answers and by getting her state representative to ask questions. She demanded that money not be taken and the union backed down, she said.

“I got paid back with two checks from them and never heard from them again,” she said. “They don’t take money from us anymore, but I’m afraid they’re going to get me back with Proposal 4.”

The SEIU has taken more than $32 million from people like the Millirons and it wants to lock its unionization scheme into the state constitution with Proposal 4.

That worries Milliron and her husband, Ron. Neither are anti-union, Geri Milliron said, but the SEIU has “no business in people’s homes.” Ron Milliron, who is a master electrician and a member of the International Brotherhood of Electrical Workers, also can’t believe that the SEIU pulled off this scheme.

He scoffs at the notion that the SEIU could provide training or improve working conditions of the people it represents. In fact, he says, his wife is better positioned to train people in how to take care of a disabled family member than any union representative because she’s been doing it daily for 35 years.

Ronnie Milliron can’t walk or talk and is like a 5-month old, Geri Milliron said. He is spoon-fed and his parents take care of his every need.

There is nothing the SEIU can do to help, Geri Milliron said.

“The problem I see with Proposal 4 is that they want to put it in the state constitution and then force us back in the union,” Geri Milliron said. “I don’t want back in."

Proposal 4: The Unionization of Home-Based Caregivers