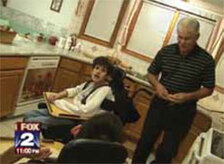 Robert Haynes at home with his children during WJBK FOX 2 Detroit’s feature coverage.

Robert and Patricia Haynes are like most parents in many ways. They care deeply for their children and keep a close eye on expenses while trying to provide what their son and daughter need. The Hayneses are unlike most parents, however, in other ways. Their adult children both suffer from cerebral palsy. “They are basically 6-month-olds in adult bodies,” Robert Haynes explains. And they were forced into a union against their will.

Rather than institutionalize their children, Robert and Patricia care for them at home. They receive a Medicaid stipend to do so, and that, in the eyes of the state, makes them public employees. About $30 a month in “union dues” is deducted from their checks and funneled to the Service Employees International Union.

This scheme was reported by Jack Spencer in Michigan Capitol Confidential in early November, including an interview with Robert and Patricia on Nov. 9.

“We’re just parents taking care of our kids,” Robert told CapCon. “We sure could use that $30 a month that’s being sent to the union.”

Robert told Fox Business News that calls to legislators for help have gone unheeded. The only help the family has received came from the Mackinac Center, he said. During the interview, Robert specifically mentioned Spencer and Patrick Wright, director of the Mackinac Center Legal Foundation.

“Most of the issues I’ve written about have been about disagreements over policy,” Spencer said. “Forced unionization is not a question of policy, it’s an example of corruption. That’s why it was particularly heartening to see the strong response our article featuring the Haynes family received. This issue needs to be placed before the eyes of as many people as possible. Once the public fully understands the dishonesty and sheer audacity of what occurred, their response will make sure that the forced unionization comes to an end.”

The day after Spencer’s story broke, The Washington Examiner reported on it, opening the floodgates. The Haynes family was featured twice on Fox Business News, and the story was soon drawing national attention, including mentions on Rush Limbaugh, National Review Online, The Weekly Standard, The Blaze, FrontPage Magazine, Townhall and Hot Air. An editorial in The Detroit News on Nov. 12 compared the situation to a similar scheme involving the illegal unionization of home-based day care operators in Michigan, which came to an end last March after an 18-month legal battle spearheaded by the MCLF. It was also the lead story on the 11 p.m. news Nov. 15 on WJBK in Detroit.