An Evening With the Mackinac Center: Celebrating Policy Entrepreneurs

Indiana Gov. Mitch Daniels addresses a crowd of nearly 600 at An Evening With the Mackinac Center.

For practical reasons, politicians typically feel compelled to propose policies that are politically acceptable to the public. For many pols, that’s an excuse to play it safe.

As the keynote speaker, Gov. Daniels was a perfect fit. Speaking simply, wryly and without written remarks, he explained how seven years ago, on his first day in office, he abolished public-sector collective bargaining — something he could do unilaterally, since it had been established in Indiana state government by executive order. This bold gambit removed the roadblocks to a smaller, better government that employed the “Yellow Pages” test: “If it’s in there, you [the government] probably shouldn’t be doing it yourself.” The subsequent streamlining, he noted, left 21 percent fewer state employees — fewer than in 1975, and the fewest per capita of any state in the nation.

The resulting flexibility also improved state services. Permit waiting times dropped. Tax refunds came back in 16 days, rather than 31. Child protective services cleared one of the nation’s worst backlogs. Average visit times at the Department of Motor Vehicles fell to around 9 minutes and 30 seconds, with customer satisfaction at 96 percent. The state’s business climate, once “nondescript, in many cases, unattractive,” is “now routinely measured somewhere in the top five.”

Reflecting on these accomplishments, Gov. Daniels described a goal — and an attitude. The goal was one he communicated to his governing team from the start: running government “every single day in a way that leaves as many … dollars in the pockets of the free men and women who earn them as we can.” The attitude involved leadership, particularly making hard choices: “People make these calls in their personal life all the time. They’ll understand if government and those leading it put it plainly to them in that way. … [M]any things we did didn’t look too good at the time. But if they deliver, if they produce improvement — tangible, concrete results — folks will open their minds … and come to a new point of view.”

A classic example was his decision to end public-sector collective bargaining: “The sky did not fall, the revolution did not begin, maybe because we acted so quickly and suddenly. There’s a good lesson in there, Rick, and I think that I’ve mentioned to a lot of other governors: What ought to be done — do it early, do it fast, do it swiftly and do it decisively In the wisdom of the old country song, ‘If I shot you when I should’ve, I’d be out of jail by now.’”

Gov. Snyder, introducing Gov. Daniels, explained that when he decided to run for governor, “I said I would really like to go visit the best [governors]. So actually, Gov. Daniels was kind enough to have a meeting with me.” At that meeting, Gov. Snyder brought up the now-repealed Michigan business tax, saying, “Gov. Daniels, I want to get rid of the dumbest tax in the United States, so you don’t get most of your business from our state.”

Mackinac Center analysts had also recommended repealing the tax, and Gov. Snyder had kind words for the Center’s work, saying: “First of all, I’d like to say thank you to the Mackinac Center, to Joe [Lehman], to your board, to your entire team. You do provide a good role model in terms of the research, the thoughtfulness, the ideas that you put forward. It is very helpful, … because it’s about getting people on board and having facts and information to share. … I even keep the ‘101 [Recommendations to Revitalize Michigan]’ around near my desk and pull them out and see how I’m doing on the list every so often.”

Another key issue on which Mackinac Center analysts and Gov. Snyder had agreed was that the more than 40,000 home-based day care workers and business owners in Michigan are not government employees. The newly installed Snyder administration’s decision to stop the illegal collection of government employee “union dues” from these providers had ended a lawsuit filed against the state by the Mackinac Center Legal Foundation (see Impact Spring 2011), and during the event at the Lansing Center, Mackinac Center President Joe Lehman honored the brave stand of the Center’s clients in that suit with the Center’s Lives, Fortunes and Sacred Honor Award.

In accepting the award on behalf of co-plaintiffs Sherry Loar and Michelle Berry, Paulette Silverson said: “I am honored to accept these awards on behalf of Michelle, Sherry and myself. It has been a privilege to work with the Mackinac Center. They have pushed relentlessly for the truth in our case. … The results, in my opinion, are a very big victory for freedom, and I thank you.”

Also honored that evening was former Mackinac Center President Lawrence W. Reed, who received the Center’s Champions of Freedom Award. In presenting the award, Lehman quoted Reed’s own words: “We need to take time to assist our brothers and sisters who are laboring in the same vineyards, on behalf of the same causes. When we strengthen others, we all grow stronger.”

Gov. Daniels echoed that sentiment in his remarks on Michigan. He spoke warmly of restoring the Midwest’s economic strength. He also described how popular support and positive policy change become mutually reinforcing, saying: “This is what I predict you are going to do in Michigan. Success breeds more success. Be bold. Take chances. Trust your fellow citizens.”

That’s what the Mackinac Center is all about. 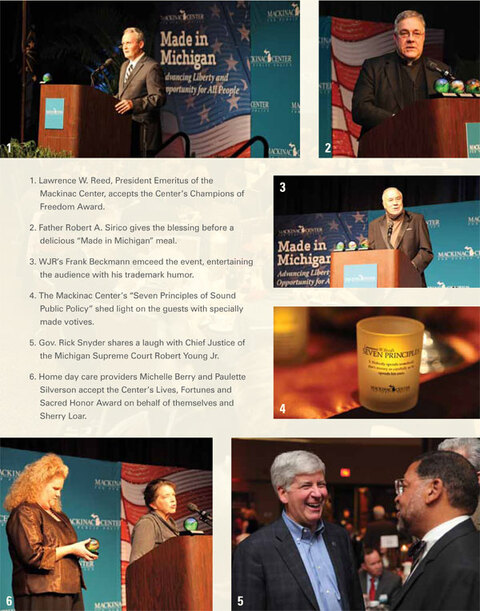