Determining how many of those jobs have actually been created and the size of the credits granted is central to determining the program's success or failure. Specifically, a number of measurements make sense in tracking the program's effectiveness:


This final point is important. A business may conclude that it faces a higher cost — perhaps because of higher taxes or higher wages, for instance — if it locates in Michigan rather than somewhere else. State law requires that the Michigan Economic Growth Authority consider this potential cost disadvantage before reaching a MEGA agreement with the business. This process serves as a safeguard, however weak, against frivolous MEGA agreements, and the resulting information is valuable in determining what factors are making it unattractive for businesses to locate in Michigan.

For example, a review of statements of cost disadvantages in MEGA "briefing memoranda" permitted the authors in 2006 to determine how frequently businesses cited higher taxation, higher labor costs, higher worker compensation costs and so on in claiming the need for offsetting tax credits before locating in Michigan (see Graphic 7).[117] Such information can help state lawmakers determine which tax, regulatory and policy reforms might help Michigan's business climate. 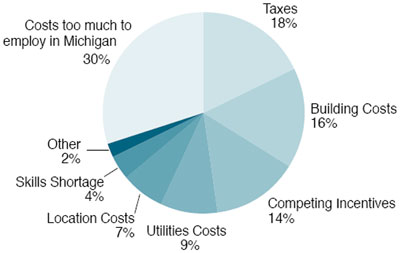 In the past, the data described in the five bullet points above has been available to anyone willing to request and sift through a stack of documents produced by the MEDC. Specifically, the documents were the "Briefing Memoranda" for each MEGA deal; the "All MEGA Projects" Spreadsheet; the "MEGA Credits" Spreadsheet; MEGA's Annual Reports to the Legislature;[†] MEGA Tax Credit Agreements (the binding but amendable agreement between MEGA and a representative of the business receiving the state tax credits); and the Economic Effects Report, which includes technical economic modeling output that provides some sense of the expected spin-off economic impact of a particular agreement.[‡] The information in these documents was frequently useful, though it is also true that the figures themselves are mostly unaudited. 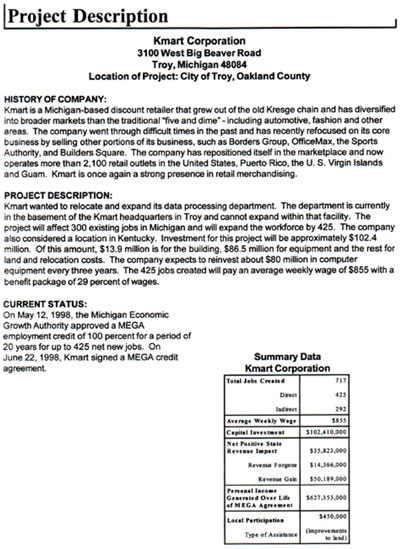 [†] Part of the law authorizing MEGA (MCL § 207.810) mandates that the authority provide an annual report on its activities to the state Legislature. In past years, these annual reports were rich in detail and nuance. They contained a written executive summary, tables summarizing the details of each new MEGA agreement, and a project description for each deal (see Graphic 8 for an example). Also included in the report was a set of very important data about the local incentive contributions associated with each MEGA deal. Together with the briefing memoranda mentioned above, this report allowed a tally of the overall state and local contributions to a MEGA deal, not just the value of state-level incentives.

[‡] The MEDC generates the data in the report either by using REMI economic modeling software - a well-known proprietary program - or by hiring outside economists to use the software to calculate the anticipated economic impact of the jobs that each MEGA deal is expected to create or retain. It is worth noting that if forecasters' assumptions about a recipient firm's performance are off, so too are claims that depend on this, particularly "spin-off" (or "indirect") jobs.