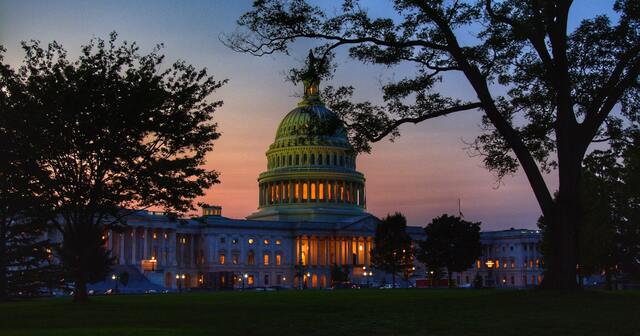 It did after the last recession

Due to the federal coronavirus response, Michigan’s budget last fiscal year was the largest it’s ever been. This year may break that record as lawmakers discuss how to spend recent federal transfers and further proposed spending bills. People ought to be concerned about whether this is going to ratchet up federal spending permanently. It’s happened before.

Transfers from the federal government to the state increased from $23.2 billion in fiscal year 2018-19 to $33.7 billion in 2019-20, a 45% increase. Lawmakers haven’t yet budgeted for the extra money approved in both December and March, but this will likely push 2020-21 spending up quite a bit. This is a massive increase in federal transfers to the state budget.

The influx of cash from Washington is similar to what happened during the last recession. Federal spending increased 44% from 2007-08 to 2008-09. Unlike the current crisis, state tax revenue actually fell, dropping by 7%.

Federal spending stayed high even after the recession was over. While there were reductions, they never fell anywhere close to the pre-recession levels. 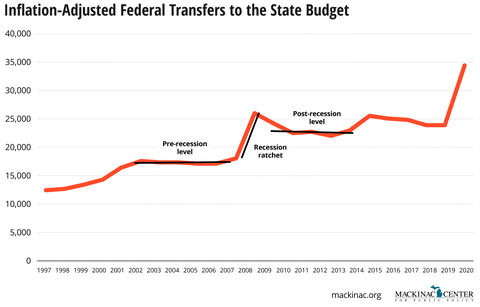 There were some other important policy changes. State lawmakers expanded Medicaid eligibility to collect further federal cash in 2015 and that increased the share of the state budget that comes from Washington.

Federal transfers accounted for 25.7% of the state budget in FY 1998-99 and 40.3% prior to the COVID-19 pandemic. They increased to 49% last year. It remains to be seen how much it will be for the current year as Congress is debating further spending plans.

While some money went to legitimate needs spurred by a global health crisis, much of it was just piling on more revenue for the state budget. The Democrat-controlled Congress likes government spending and gave state and local governments more money to spend.

There is a question about how long this can continue. The federal government borrows money to redistribute to states, and the U.S. has never had so much debt. It’s not as if the government is going to return to balanced budgets any time soon, so ratcheted-up transfers to state governments only adds to the uncertainty of how much the government can borrow.

There is another reason to be concerned about whether this mass of federal spending will continue: with the shekels come the shackles. The most recent $5.7 billion that was transferred to Michigan is not going to be spent on state lawmakers’ highest priorities, but on those of Congress. The money is prohibited from being spent to offset revenue declines from tax cuts or to pay down pension debt, for instance.

It’s unclear whether federal administrators are going to take a strict approach to these strings. They could allow it to free up cash state policymakers could use to fund to their priorities, or they could put their foot down and demand that accepting federal money precludes states from paying down more pension debts or lowering taxes for the next few years.

This uncertainty ought to raise red flags about the relationship between the federal government and the states. Important decisions about state tax policy should not be made in Washington. If everything is determined by the federal government, state budgets become both homogenized and irrelevant.

Some strings placed on federal spending are justified. If the federal government needs states to accomplish certain policy goals, then they ought to provide guidance for what they ought to accomplish with federal transfers and prohibit extraneous uses of that money. Federal highway spending should be spent on highways, for example. States ought to be careful, however, about accepting cash if it comes with restrictions on normal state policymaking. Highway spending shouldn’t but used to also dictate criminal justice issues.

The concern that federal cash will cross-contaminate state policy becomes more important as the federal transfers increase. This should be added to the uncertainty about how much the U.S. government can borrow without causing damage to the economy. Both of these problems could be alleviated if Congress would return transfers to state governments to pre-pandemic levels when the pandemic is over.