What’s Old is New Again: Another Subsidy Program Being Considered by Legislature

Good for politicians and well-connected businesses, bad for Michigan 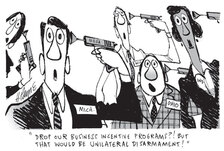 April 18 is tax day in America, and in Michigan it’s also the 22nd anniversary of a failed corporate subsidy program known as MEGA, or the Michigan Economic Growth Authority. Although it was repealed in 2011, MEGA continues to raid the state Treasury every year, wasting shockingly high amounts of taxpayer money in the process.

The previous administrations used MEGA to give some companies, including some of the largest corporations in the state, multiyear subsidy deals that cost Michigan taxpayers $1 billion in 2016 alone. The cash payouts for this year are projected to be $660 million, with little to show for any of it.

The state officially stopped handing out new tax credit deals in 2012, replacing it with a budgeted direct subsidy program. The MEGA program had a horrendous record, too. Now friends of corporate welfare are back and raring for more. This new scheme has many features of the old program. The essence of both programs is that they take state tax dollars collected from families and small businesses and give them to a tiny handful of politically well-connected developers and big businesses.

The new program would give away up to $250 million more over 10 years. Wasting money more slowly doesn’t make it any better an idea.

The new proposal (Senate Bills 242 to 244) is called “Good Jobs for Michigan,” and is dressed up to appear costless and a net benefit for all. But like all such selective corporate subsidy programs, it is designed to transfer money from small businesses and working families to a favored few developers and company owners, some of whom may already be millionaires and billionaires.

MEGA also demanded this and had other stipulations too, but it still failed to create net new jobs and wealth. Now some of the same individuals are involved in the new scheme, so perhaps, not surprisingly, there are yet more similarities between it and the proposed Good Jobs for Michigan (GJFM).* For example:

The nonpartisan Senate Fiscal Agency points out the new bills do not define “economically sound.” It could mean anything, and in MEGA’s case, it meant nothing.

That’s no exaggeration: MEGA once approved a deal for a company that apparently existed only on paper, created by a convicted felon on parole for a financial crime. This company may have been fictional but it was still considered economically sound at one point by state bureaucrats. The MEGA never paid out, but that was in part due to the felon’s parole officer spotting him in press coverage related to the deal.

These “but for” provisions invite abuse, because such counter-factuals are ultimately unprovable. The provision is a cover story for politicians pretending the subsidies will create whole new jobs, businesses or industries that wouldn’t exist “but for” their favoritism. Subsidies to build electric vehicle batteries and produce films were recent Michigan programs that showed not even huge handouts can overcome economic reality.

These analyses are purchased by economic development agencies from a cottage industry of consultants who exist the serve the agencies’ “budget justification” needs. They are generally not worth the paper they are written on, with methods and inputs that are easily gamed to generate whatever results the client seeks.

Their products are crafted to give the appearance of independent scholarly research, but in fact they frequently violate its canons. The methods are sometimes secretive, not transparent; they sometimes do not use public data sources; and rather than being independent, they have an inherent conflict of interest.

In some cases, the products are quickly dismissible. For example, an arm of Michigan State University was paid by the agency that runs most of these programs here, the Michigan Economic Development Corporation, to produce a paper on its film subsidy program. The university’s sure-fire method to demonstrate the program was a “big hit” was to exclude all its costs from the analysis. The summary might as well have read: “No cost; all benefits.”

Similarly, the MEDC also pays a consultant to calculate an alleged “return on investment” for millions of dollars spent on state tourism ads. Yet the claims are empty because the vendor refuses to disclose the details of precisely how it arrives at the fabulous figures it reports. Nevertheless, MEDC bureaucrats implicitly demand that legislators, the public and media just take their word.

But with millions of dollars in subsidies (and agency) salaries involved, the MEDC also uses sophisticated tools itself to paint a false picture of its programs’ outcomes. One is a software program called REMI, used by the agency to predict the supposed impact of the Michigan Business Development Program. No matter how big their computer, however, the model’s output is entirely invalid when the agency refuses to make public the assumptions their analyses are based on.

Such behavior should win these analyses scorn, derision and a hand-waving dismissal. Few serious policy analysts would take secretive and questionable products seriously, yet they are woven into the state laws authorizing business subsidy programs as if their conclusions have some real meaning. The reality is that such products produced by and for the MEDC are basically empty public relations gimmicks.

The MEGA law that appears to be the inspiration for the new proposal was originally intended as a narrow device to bring new industries that “but for” that subsidy might not come. In fact, some supporters of the old MEGA program are back and blurring the line between big business and big government in the name of “economic development.”

It’s not only the re-emergence of the same cheerleaders but also the symbiotic relationship between business and government they favor that should make Michiganders reject the recycled MEGA model. When you have a hammer everything looks like a nail, and when you’re an advocate for the interests of large corporations the economic development programs you support inherently tend to favor big business over broad-based economic freedom. Even with the best intentions from the people in charge, the signal that the Michigan’s economic development aristocracy sends to entrepreneurs is that their paths to success lie through lobbying government for subsidies, rather than serving customers.

This is both disturbing and sad. Selective business subsidy programs like MEGA have been extensively studied by academic economists who have found much evidence and offered many explanations for why they waste money and don’t work.

MEGA itself has been the focus of five independent analyses. Four of them (two by the Mackinac Center in 2005 and 2009) found a zero-to-negative impact. One study found a positive impact but it was small. A 2014 jobs count of the program by Michigan Capitol Confidential found that just 2.3 percent of MEGA subsidy agreements met their expectations, making the “company to add one hundred jobs” press releases an exercise in fiction.

Adding injury to insult, the program continues to cost Michigan taxpayers hundreds of millions of dollars a year, blowing unpredictable holes in our state’s budget

These programs are less about economic development than political development. They represent government elites working hand-in-glove with well-heeled business owners to advance the interests of both sides, not the public interest.

Senate Bills 242-244 have already passed the Michigan Senate and are now pending before the House Tax Policy Committee, which may take them up soon.