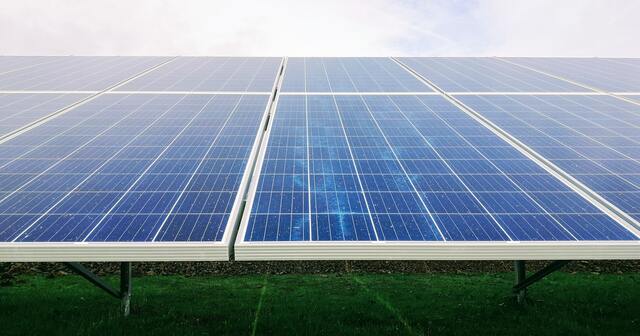 Solar and wind set to profit handsomely from COVID-19 response

Speaker of the House Nancy Pelosi returned to Washington on Monday to release her own version of the third COVID-19 stimulus bill that had been hammered out in the Senate over the weekend. Claiming the Senate version didn’t focus on the American people and was too generous to large business, the Speaker’s bill of more than 1,100 pages stalled ongoing Congressional discussions with its $2.5 billion laundry list of handouts. Potential beneficiaries included labor unions, public broadcasters, the John F. Kennedy Center for the Performing Arts, the U.S. Postal Service and many others.

While discussions are ongoing and changes are coming in at a rapid pace, a substantial portion of the proposed stimulus still focuses on Green New Deal-style attempts to limit greenhouse gas emissions and promote renewable energy. For example, any funding for airlines could require that they agree to meet mandatory CO2 emission reductions. Financial aid proposals for the renewable energy industry appear to answer the demands of a March 19 letter from a coalition of seven renewable energy trade associations to the House Sustainable Energy and Environment Coalition.

The coalition’s letter called for special tax incentives, emergency relief from “start construction” and “safe harbor” deadlines, and “direct pay tax credits” for battery storage. On their own, industry officials also revived their demands for new and extended tax incentives that were rejected in congressional debates over 2019 spending. They sought "refundability” provisions that would allow solar and wind developers to “monetize time-sensitive renewable energy credits,” meaning they could immediately turn promises of future tax credits into cash by selling them to investors.

Of course, the renewable energy industry isn’t alone in its requests. The coal and nuclear industries have also sought federal aid to help keep them afloat during the economic disruptions brought on by the COVID-19 virus. But those industries are notably absent in the potential list of stimulus beneficiaries. And their omission is interesting because existing coal and nuclear generation capabilities actually provide a reliable and affordable service to people sheltering in their homes across the nation. In fact, they provide electricity at about half the cost of new wind and solar energy technologies. Certainly wind, solar and large-scale battery storage have dropped in costs significantly in the past decade, but they still fall short when it comes to providing reliable, affordable, standalone electricity.

Compounding the contrast, the coal and nuclear industries’ requests sought short-term suspensions or reductions of royalties and regulatory fees to help them get past COVID-19 disruptions. But renewable companies are seeking both immediate cash infusions as well as permanent extensions of their existing tax credits.

We’re loathe to suggest that government stimulus is ever a good policy idea. But if the COVID-19 crisis is seriously threatening the reliability of the nation’s electricity grid, and a government stimulus is the only possible option, then any government involvement should meet some strict limitations. Stimulus funds should be proposed for a specific time frame, after which they are fully cut off. They should prioritize energy sources that provide consistent and reliable energy. Lastly, they should go to energy sources that don’t already rely on government aid for their very existence.

As if to reinforce the need for limits on government aid, the Solar Energy Industries Association has perhaps unwittingly stated that its members can’t survive without government support. Abigail Ross Hopper, SEIA’s CEO, warned that disruptions caused by the COVID-19 virus have caused "customer demand for solar [to] plummet” and that “uncertainty about the ability to qualify for and monetize tax incentives will have real and substantial negative impacts” on the industry. American Council on Renewable Energy CEO Gregory Wetstone concurred, explaining that favorable tax incentives are “central to the financing” of further renewable energy developments.

But a continued need for government financing to prop up development plans and stop the flow of fleeing customers is not what one would expect for a product being promoted — by green groups, supportive media, and the renewable energy industry — as competitive and reliable. If renewable energy were truly the essential, secure energy source the industry claims, customers (whether homeowners seeking residential solar systems or utilities looking to build larger wind and solar installations) would be turning to it in droves during times of societal instability. If renewable energy were capable of solidifying our generation capabilities at a lower cost than other energy options, customers and utilities would be snapping it up faster than toilet paper or disinfectant wipes.

But after decades of expansive direct federal aid and generous state-level market mandates, the renewable energy industry still produces an overly expensive product that cannot provide the same level of service as the products produced by its competitors. In both good times and bad, we see that neither residential or utility-scale renewable energy can compete (read: they won’t get built or used) without a continuing flood of subsidies and mandates. Despite (or more likely because of) this fact, the renewable energy industry is first in line at the stimulus trough, demanding (once again) that a nation, already constrained by the COVID-19 issue, dig even deeper to keep it afloat. Unfortunately, ongoing discussions appear ready to seriously consider to those demands.