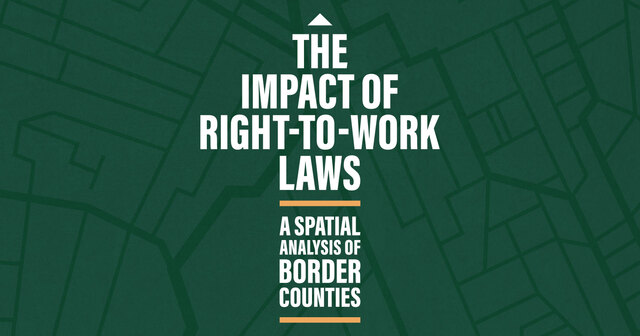 MIDLAND, Mich. — Right-to-work states have seen a significant bump in manufacturing employment compared to non-right-to-work states, according to a new study released by the Mackinac Center for Public Policy. The study provides a look at how right-to-work laws have influenced the composition of the job market.

Nationwide, the study found states that adopted a right-to-work law after 2000 had a 20.7% higher share of manufacturing employment than they would have without such a law. The study measured employment levels across the United States at the county level, looking at 18 industrial sectors in more than 3,000 counties. The most meaningful results came from sectors where unions are most common, such as manufacturing and construction.

“Our rigorous analysis of data from 3,000-plus U.S. counties demonstrates that right-to-work laws can have very beneficial results,” said Todd Nesbit, co-author of the study and assistant professor of economics at Ball State University. “Lawmakers should consider the positive impact that right-to-work has on attracting jobs to their states.”

Across the four-state region of Michigan, Ohio, Indiana and Wisconsin, there was a realignment of manufacturing jobs away from counties without state right-to-work protections. Indiana performed particularly well. Manufacturing employment as a percentage of total private employment in a given Hoosier county is more than 27% higher than it would be absent right-to-work.

Michigan, which adopted its right-to-work law nearly 10 years ago, witnessed similar economic effects, but its smaller sample size limited the statistical strength of the result. Michigan’s gains appear to be coming at the expense of Ohio’s counties. Manufacturing employment as a share of total private employment across Ohio counties was 30% lower than it would have been with a right-to-work law.

“There is a clear realignment of the share of employment to counties in states with right-to-work protections from those that have none,” said Michael LaFaive, senior director of the Morey Fiscal Policy Initiative at the Mackinac Center for Public Policy and co-author of the study. “Right-to-work not only gives workers additional freedom, it has broad benefits for states as well.”