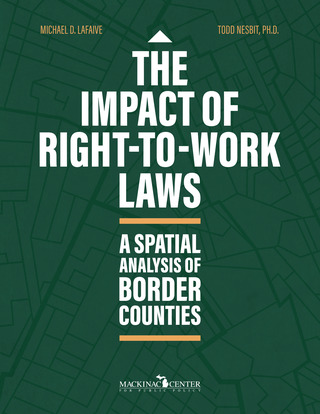 The Impact of Right-to-Work Laws: A Spatial Analysis of Border Counties

This analysis relies on a measuring technique popularized by economist Thomas J. Holmes. It involves measuring employment changes in industrial sectors as a percentage of total employment and comparing these among counties in neighboring states across time. We collected data from counties across the contiguous United States. The information included employment data from 18 industrial sectors of the economy. We also collected data on a host of control variables. These include demographic information on local populations, such as the percentage of the population in poverty, percentage older than 25 with at least a bachelor’s degree, percentage that is female, percentage that is nonwhite and the percentage of the population aged 20 to 64. To control for other state policies that may influence employment growth but are unrelated to right-to-work, we also included the 2017 economic freedom score of each state from the Fraser Institute’s Economic Freedom of North America report.