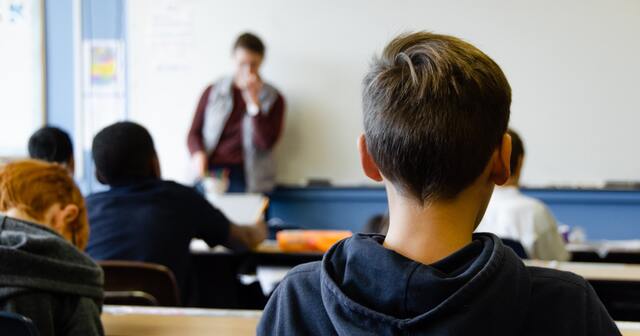 “Wouldn’t we all be Happier if we Didn’t Have to Listen to and Talk about Blaine Amendments? But They Exist.”

Parents struggled to find adequate learning opportunities for their children after the COVID-19 pandemic forced public schools to shut down in early 2020. To talk about this situation, and whether these frustrations will lead to changes in education policy, I spoke with my colleague Ben DeGrow for the Overton Window podcast.

DeGrow notes that our public school system already did not work for everyone, but it worked for even fewer parents when COVID hit. District officials found it hard to provide meaningful learning opportunities during constantly changing circumstances. They would pledge to do one thing and switch it the next week, sometimes in response to county health department orders. “Frustrations mounted as parents, many of whom were working from home, had to also deal with their children’s lack of learning at home,” DeGrow said.

He said that people want different things from public education, and few are getting what they want. Many families want schools to prepare their children for success in life. Another widespread desire is that public education will lead to educated citizens. Others ask schools to take on a number of functions, like providing proper nutrition to growing children and teaching skilled trades to adolescents. “When you have conflicting visions about what public education should be, and it’s not even meeting the basic expectations that parents have and that the broader public has, now you have an added sense of chaos and turmoil that fuels conversations about what we can do differently to make education work better,” DeGrow said.

And this may change what is politically feasible in education policy. Right now, Michigan has options for parents to send their children where they want, but it lags other states in offering scholarship opportunities. This is because the state constitution prohibits Michigan from using taxpayer dollars to support private education options by its “Blaine Amendment.”

The term refers to provisions many states added to their constitutions in the late 19th century to prohibit state support of Catholic schools. DeGrow says that, at the time, even public schools provided Christian education, but a type that was different from Catholic education. “Listeners may or may not know that public schooling was largely ecumenical Protestant in nature. Teachers read to students in the King James Bible and led students in Protestant prayers,” DeGrow said. Immigration from Catholic countries got some state residents to be worried that the new citizens would change education and added laws that prohibited state support of Catholic schools.

Michigan’s amendment came much later than those in other states, though. It came in response to a strange situation in the late 1960s when some lawmakers, following a State Board of Education recommendation, wanted to pay for private school teachers. “At least some segment of the population recognized the public value that private schools offered,” DeGrow said. Others, including the teachers unions, were upset by this idea and pressed for and won approval for a state amendment prohibiting the practice.

The Mackinac Center is challenging the legality of this law. Blaine amendments have been struck down in other states, but Michigan’s has so far withstood all challenges. The state gives tax advantages to families that save for education and college expenses through its 529 savings plans, which let parents accumulate funds for some education-related expenses. But the amendment prohibits the accounts from being used to pay for private religious school tuition.

DeGrow said a handful of public schools charge parents tuition to get in, provided the parents don’t live within district borders, and parents can use their 529 savings plans to pay that expense. “But if I wanted to take my 529 plan and use some of those funds to go to the Catholic or Lutheran school down the street, it’s not eligible,” DeGrow said.

“Families in Michigan are well behind choice opportunities that are available in other states. If we can’t make this argument now on behalf of families, then when will be able to do that?” DeGrow asked.

In addition to hoping for a win in court, DeGrow wants lawmakers to be more ambitious about exploring education savings accounts. “For the last 50 years, Michigan legislators have seen the Blaine Amendment as an obstacle that’s prevented them from even thinking about using all the tools in the toolbox to help families with the options they need,” DeGrow said.

Asked whether efforts to change policy will be successful, DeGrow replied that it depends on whether the frustration that parents have had over their options changes the climate of popular opinion. “That parent demand is what it’s going to take to give us the opportunity to push the window forward,” DeGrow said.