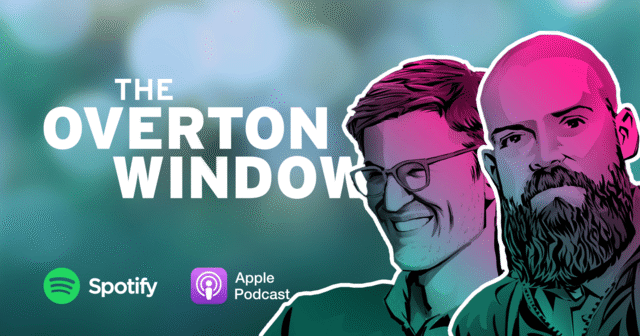 Ryan Green and Austin Berg work at Iron Light and consult with advocates around the country to help them persuade people on policy issues. In 2020 they opposed a constitutional amendment to install a progressive income tax in Illinois, which voters rejected 53 to 47. Green also has a paper out, Using Persuasion to Win the Culture War, that lays out his approach. Green and Berg join me to discuss communications strategy on this week’s Overton Window podcast.

Illinois has a flat income tax, in which income is not taxed at higher rates when people earn more. The flat tax is part of the state constitution. Gov. Pritzker tried to change that in 2020 by putting a constitutional amendment before voters, calling his recommended policy the Fair Tax. Berg and Green worked to convince people to vote against it. “In the spring of 2020, it was ahead 30 points. It was 65% approved of it in the state and 35% disapproved. It was an uphill battle to defeat it [in the fall],” Berg says.

“We started with really getting to understand where voters were on the issue and dissecting specific segments on the voter population, not only determining where they were on the issue but how they could be moved,” Green says. That meant both modeling the size of different voter populations and also testing messages that would work with different voters.

“There’s a content strategy we use called SCARF. It’s an acronym for what initiates a fight-or-flight response. It stands for status, certainty, autonomy, relatedness and fairness,” Berg says. They use this to think about what they can say to get voters to care about an issue.

Testing also means that they can check to see whether a strategy is effective or not. “Early on in the campaign we talked to some folks on the pro-taxpayer side saying, ‘We’ve got this awesome marketing idea. We’re going to call it the Unfair Tax.’ And the crowd goes mild. Nobody cared about that,” Berg says.

Rather, the certainty part of SCARF resonated with voters. “What we found was that framing the progressive tax as an attack on retirement incomes — which it would allow for — really moved voters across age demographics and across both political spectrums,” Green says.

“Politicians we don’t trust are going to get this new power. And what are they going to do with it? They might come after your retirement income. That unlocked a very powerful aspect of certainty which combated the fairness message,” Berg says.

“So we decided, given the resources we had relative to J.B. Pritzker, that we would go all in on that issue and not really talk about anything else,” Green says.

“We were able to identify a retired Chicago police officer who was a pensioner and get him to agree to sue Gov. Pritzker over the progressive tax issue. So we sort of held that back and dropped that as our October surprise headed into November. And so we dominated the news cycle over the month of October. I believe we had somewhere around 250 media hits related to that lawsuit alone,” Green says.

As to the voter modeling, Green simplifies it like this: “The goal is to put voters into quadrants based on propensity to vote and then likelihood that they could be moved on an issue. And just scoring them based on those two factors. Then reverse engineering your budget based on the people you feel are the most highly leveraged out of that quadrant.”

Once Berg and Green knew whom they were looking for, they turned to social media to find those people and reach out to them. “We try to have a confluence of both educational content, entertaining content, aesthetically pleasing content. You know there are components to what creates an engaging piece of content and an engaging experience. So you will be met with that, most likely on Facebook,” Green says.

They’d encourage the people who engaged to sign up to an email list to receive more information, sign a pledge, sign a petition, and otherwise engage. The most important outreach is to educate the audience about the issue. “We’ve tried to make a really rewarding user experience so that they felt really equipped going into the election,” Green says.

As mentioned already, voters rejected the proposal. They had taken something that seemed like a given in the spring and helped the majority of voters reject it through finding out who could be persuaded and delivering them a persuasive message.

The victory meant a lot to them, and to some of the people they engaged. Berg mentions that their retired Chicago police department plaintiff passed away last year. “His son called me and he said, ‘I wanted to say hi and introduce myself. What you did with my dad meant so much to him.’” Berg says, “That was really meaningful. The fact that someone cared enough about us and respected us to partner with us, giving their name and their likeness and their face to our campaign, and their blood, sweat and tears and their heart; that really meant a lot.”