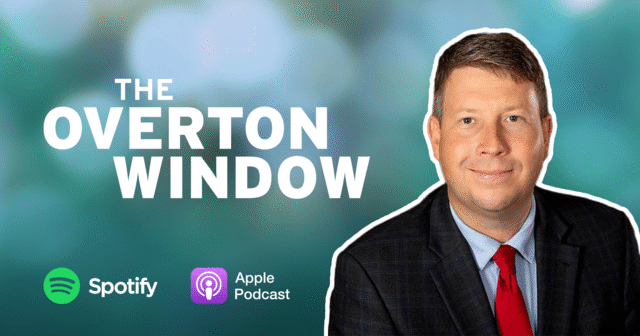 Elected officials want to pass popular legislation. They have to rely upon their senses to figure it out when they deal with complicated issues. One way politicians make sense of what voters want is to listen to the conversation going on across the country and the reaction to laws that are passed in other states. Jonathan Williams, the chief economist and executive vice president of policy at the American Legislative Exchange Council, helps legislators hear what is going on in other states at the conventions his organization hosts. I speak with him about it for this week’s Overton Window podcast.

“States are laboratories for innovation and collaboration, seeing what works and what doesn’t work,” Williams says.

The people at ALEC want to provide state legislators with the best ideas of what was happening in states to replicate.

“We have a library of nearly one thousand pieces of model legislation. It’s not a secretive thing. We encourage anyone with internet access to go out and check out all of these. Some obviously work for some states, some don’t,” he says. He recommends checking out ALEC’s 2022 policy priorities.

Williams has called on states to pass flat-rate income taxes for a long time. And recently, some state lawmakers have listened.

Williams notes that over the history of state taxation, states have only added income taxes, with Wisconsin creating the first income tax in 1911. “In that 110 years that states have been taxing income, there were a grand total of four states that had gone from progressive, graduated income taxes to flat taxes,” Williams says. “Fast forward to 2022 and we went from four to nine. So more than double that amount in one legislative session.”

“The research out there shows that taxing income is the most damaging way of taxing at the state level. Focusing on income taxes and on permanent rate reductions matters,” Williams says.

This is in part a reaction to a national policy debate. “So many of these common sense, free market legislators are looking with unbelievable confusion, wondering what in the world the Biden Administration is thinking,” Williams says, “Everything that you should be doing in economic policy at the federal level… In the Biden Administration, they’re doing just the opposite.”

Legislators in some of the states also felt the need to catch up with regional competitors. “Two states this year, Mississippi and Georgia from the southeast, became flat tax states. It’s likely that we may see Arkansas and Louisiana in the coming years take this up. And think about the southeast for a minute. You’ve got a triangle in the southeast of no income tax states, economic powerhouse states like Texas, Florida and Tennessee. It’s a big driving favor to the decisions legislators made, and I spoke to them directly about this,” Williams says.

State legislators benchmarked some of their policies to other states. They looked at the reaction to what the federal government was doing. They saw the reaction that other legislators got to flat taxes. This led to five states so far moving from progressive, graduated income taxes to flat taxes in a single year when only four had done so in the past century.

Williams claims gives some credit to his organization in assisting these reforms. “Our track record as an organization, being around 50 years, is a trusted source of policy solutions,” Williams says. “People know when they go to ALEC with a free market context. So you’re going to get the very best there is to offer when it comes to policy ideas.”