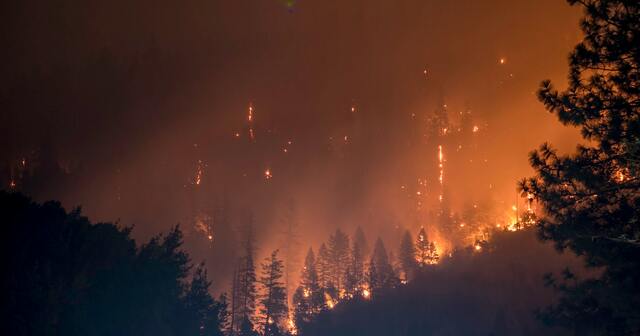 “Basically, We Created a Powder Keg”

Wildfires throughout the West are making headlines again this summer. While much attention is paid to whether climate change is making wildfires more frequent or intense, Jonathan Wood of the Property and Environment Research Center argues that dangerous fires can be mitigated with better forest management policies. I talked with him about it for the Overton Window podcast.

Wood notes that many forests are “fire adapted forests.” By that, he means they are prone to natural fires and have been managed by Native Americans with fires. They “only remain healthy if they experience fire regularly to remove underbrush and dead trees so that wildlife can continue to thrive and air and water remain healthy.”

One of the reasons why areas out west have such a high risk, is, ironically, that public foresters have sought to stop all fires. If there had been frequent low-intensity fires, then forests would not have accumulated all of the fuel — the dead trees and underbrush — needed to cause catastrophic fires. Federal foresters estimate that 80 million acres of federal forests are now at high risk of wildfire — or enough land at risk to fill all of New Mexico.

And while foresters are interested in doing something about it, the U.S. Forest Service doesn’t have the resources to do much. The incentives facing the forest service itself are to put out fires. Big fires make headlines. People demand that the federal forestry service puts out fires, and that’s where members of Congress puts their financial resources. Preventing fires? That’s less of a priority.

Wood says that the problem is getting worse. “In the last 15 years, almost 100,000 structures — many of which are homes — have been burned by catastrophic wildfires; 67% of that has been in the past four years alone. This is a problem that is growing exponentially.”

But people can do things to prevent catastrophic wildfires: They can restore forests to reduce wildfire risk. “At a basic level, it means actively managing a forest to produce the results we want,” he says, and reducing catastrophic wildfire risk is a major thing that a lot of people want when it comes to forests. He also notes that controlled burns of forests can be part of that process, too, especially for fire-adapted forests.

Active forest management, then, seems like a win for everyone: Forests stay healthier, people can enjoy them more, and forests won’t burn down the homes of people who live near them.

Active forest management is something loggers provide to forests. Dead trees and brush can do a lot to fuel fires. They don’t have much commercial value for loggers, but forest managers can require loggers to remove them when they harvest more valuable products.

He says that the older established way of wildfire mitigation was for the forestry service to enter into a contract with loggers, and the local communities would only comment on the proposal. This is still the case in the Pacific Northwest, where there is a lot of valuable wood and milling capacity. This is not so much in the southwestern U.S. But the people in local communities there are taking more of a lead role.

Wood says that it’s often a matter of resources and whether there is interest from local communities to spend money to manage forests. In addition to bearing the risk from wildfires destroying their homes, people who live near forests are the ones who also tend to get the most benefit from them, so they’re more likely to enjoy the benefits of active forest management. “They are really the ones who bear the costs of wildfires and have the strongest incentives to get this right,” he says.

Some communities have organized forest restoration efforts financed by new bonds, which pay for forest management. In California, for example, the state will pay off that bond, as will a water treatment district, since wildfires hurt water infrastructure.

Unfortunately, existing federal regulation can stymie efforts to prevent wildfires. To do active forest management, projects need to go through an environmental review process as well as an assessment about its effect on endangered species. But this means that the default is to do nothing and let the forest continue to build up wildfire fuel. This can be bad for the environment and bad for endangered species, too.

He’d like to see some exceptions to be made in federal policy whereby active management projects to prevent wildfires can be excluded from some regulations. Projects that take advantage of existing exclusions to federal approval processes take nine months, compared to a full environmental review that takes over three years and litigation can extend that even further. Under the alternative, project managers list the potential environmental effects and how they are going to mitigate them, but they must through a full review if a project can cause major environmental consequences.

The people affected by wildfires are not the only people who can provide resources to manage forests. Wood says that outdoor recreation companies, insurers, wildlife conservation groups and others also have a stake. And he thinks that working with communities and other stakeholders to engage in a collaborative process to manage forests holds a lot of promise. “In particular, getting disparate groups to all contribute … so that you’re not relying so much on timber — and that commercial value — to get these projects off the ground, but [also on] all the many other values that we get from our forests,” he says.

He is not trying to rewrite all of forest management policy, but to expand upon the things that people are already doing to prevent catastrophic wildfires. “There is a Hayekian opportunity here,” he says, “Communities have different values and different goals for their forests.” People in one community might be happy with forests as a driver of a timber industry while others may want them primarily to serve as recreation and for habitat for beloved animals.

“I’m optimistic in the medium term,” he says. He points to the massive backlog of forests to be cleaned up, which won’t get addressed quickly, but he is encouraged by the extra attention paid to the issue.

The people in communities affected by wildfires can do more forest management under existing policies, and, Wood says, they can also change public opinion on forestry issues. Currently, national environmental groups tend to dominate the federal discussion, and they have their own ends. But the people directly affected by large wildfires can do a lot to shift the Overton Window on what is possible in federal forest management if they share their stories and change the expectations of their elected officials. That would do a lot to prevent catastrophic wildfires in the future.