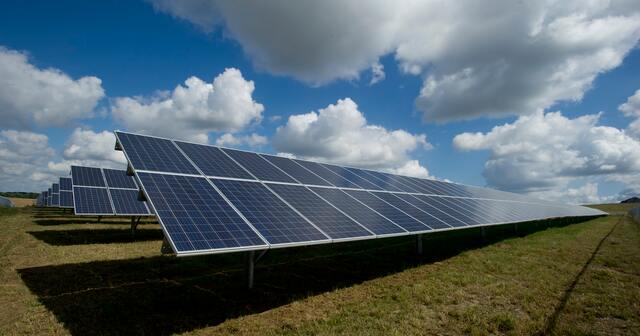 Claims about clean energy jobs tend to be misleading for a number of reasons, but the most damning is that, when it comes to electricity generation, these jobs actually get very little work done relative to their fossil fuel counterparts. The higher the clean job numbers climb, the more dismal our energy production outlook becomes. More simply, clean energy jobs do not produce all that much per worker, so it takes an enormous number of people to produce even moderate amounts of electricity through them.

In a June 10 post at the Center of the American Experiment, economist John Phelan examined the productivity of various forms of energy in Minnesota’s energy markets. We thought it would be interesting to see how Michigan’s energy markets compared.

Michigan’s energy production workforce has just under 28,000 jobs, according to the U.S. Energy and Employment Report. The largest block of jobs is in the traditional hydroelectric sector, with over 6,850 jobs. Fossil fuels — coal, natural gas and oil — weigh in at a little more than 6,500 jobs. On its own, solar employs almost 6,000, while wind kicks in just over 4,500. Just over 3,900 are listed as “other.”

The two renewable energies that receive the most media attention and government support — wind and solar — make up over one third (37.7%) of Michigan’s electric generation workforce. One might think it reasonable to expect them to provide at least the same percentage of our electricity, but they don’t. It’s not even close.

This means that coal and natural gas jobs are about 10 times more productive than wind jobs, and (an incredible) 1,000 times more productive than solar jobs. Put another way, it takes 10 employees at industrial wind facilities to match the output of a single coal or natural gas employee, and to replace a fossil fuel job with a solar job requires 1,000 times as many bodies. With statistics like these, it’s no wonder we constantly hear about the growing number of jobs in the wind and solar industries. 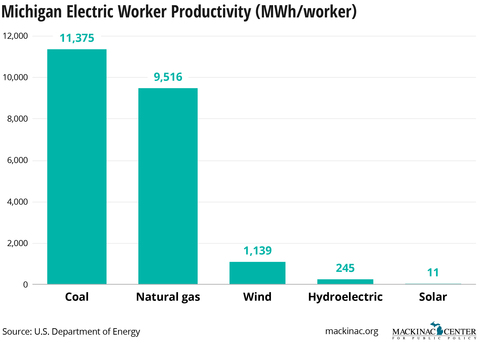 But the inefficiency of renewable energy will hit Michigan ratepayers right where they live. State regulators recently approved Consumers Energy’s Integrated Resource Plan, a document that commits the monopoly utility to eliminate all its coal generating units by 2040 and to build more than 6 gigawatts of solar generation plants. In terms of jobs, Consumers plans to depend on a far less-efficient solar process that needs 1,000 jobs to maintain the productivity of one coal job today. And the company is not alone. State regulators are currently considering DTE’s plans to close all of its coal plants by 2040 and to replace them with over $2 billion in spending to quadruple its renewable energy portfolio by 2024.

Michigan’s utilities are planning an energy future for the state that focuses on replacing high-productivity workers with multitudes of less productive ones, emphasizing technologies that have jobs that are one-tenth to one-thousandth as efficient. The utilities have had problems with dispatchability and relying on unreliable energy sources. But even if they can move past those problems, their vision for the future will still require an unnecessarily large workforce to do the job that a few skilled workers have been doing thus far.