For a long time, the costs to employ people to work for the state of Michigan increased even when the number of state employees was down. But it seems lawmakers and administrators may have finally changed the trends, and this can allow for more public servants at lower costs to taxpayers.

The number of full-time equivalent employees in Michigan’s government declined from 62,057 in 2001 to 46,588 in 2015, a 25% decrease. However, the amount that taxpayers spent on state employment increased above inflation even with the decline, largely driven by a 63% increase in employee benefits costs.

State employment started growing again around 2015, with employment inching upwards by 1% since then. But the total cost to employ the state workforce actually declined 2% over the period, as the costs of benefits declined by 5%. 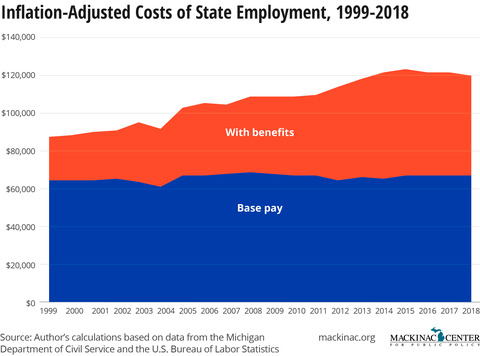 Payments into the retirement system are still high. They cost an average of $34,000 per year. The state retirement system went from near full funding to owing employees and retirees $6 billion, which is a problem when the system isn’t supposed to have any unfunded pension debt. And this underfunding doesn’t make employment benefits any more generous, so the debt is bad for employees and taxpayers alike.

New employees haven’t been offered participation in that plan since 1997 but now receive 401(k)-style retirement benefits and no unfunded liabilities have been generated for them.

The state also has offered to pay employment insurance costs upon retirement, even for employees covered by Medicare. The state had been simply paying insurance premiums as they came due, but lawmakers have attempted to set money aside to pay for what has been offered. They are roughly a quarter of the way there according to their most recent financial statements.

The costs of employment benefits are still high. But there has been progress and the trends are headed in the right direction. It has also meant that the state can hire more people and also spend less on total employment. And that’s good for Michigan taxpayers.