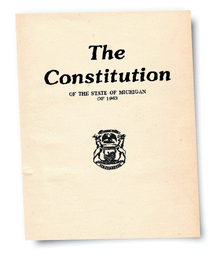 Delegates to the Michigan Constitutional Convention in 1961 and 1962 saw the danger in public pension systems and tried to end it. The result has been an honorable defeat.

(Editor's note: After this Viewpoint went to press, the unfunded liability in the state's school employee pension fund was revised upward to $22.4 billion. The text has been updated to reflect this figure.)

Michigan state government’s pension fund for public school employees is currently $22.4 billion underfunded, a massive shortfall. In response, the Michigan Senate has voted to close the plan to school employees hired after 2012 so they won’t add to the fund’s liabilities; these workers would receive retirement savings accounts instead.

“We believe this constitution must be a forward looking document; … that it must spell out for the future the manner in which these funds should be managed, so that our children will not, 50 years hence, suffer from the fact that we failed to put in enough money. …"

Closing the plan has been questioned, as if the current system could be maintained with some extra money. But in fact, Michigan has run a nearly 50-year experiment with constitutionally protecting public pensions, and it is time to acknowledge that this experiment, despite forethought and care, has failed.

The exercise began at the Michigan Constitutional Convention of 1961 and 1962, when the delegates addressed a topic that had not been included in Michigan’s previous constitutions: the funding of state and local government pensions.

As the chairman of the convention’s committee on finance and taxation explained: “The problem here is extremely difficult. Any public [pension] system that is set up should have put into it each year sufficient money to meet all of the liability accrued during that year. If that is done from the very beginning, the system is not an excessive burden; but when you go for years without putting in enough money to cover the liability accruing each year, then to try to catch up for the past deficiency becomes a problem of magnitude.”

The delegates sought to end this practice by constitutionally requiring state and local governments to finance pension benefits on an adequate annual basis. As one delegate put it, “We believe this constitution must be a forward looking document; … that it must spell out for the future the manner in which these funds should be managed, so that our children will not, 50 years hence, suffer from the fact that we failed to put in enough money. …”

The delegates were also concerned about fairness to workers. Court rulings had suggested that public employees had no enforceable legal claim on their pension when they retired, allowing their government employers to renege. The delegates saw this as unjust.

Both concerns were addressed directly in the final language of the Michigan Constitution of 1963: "Financial benefits arising on account of service rendered in each fiscal year shall be funded during that year," the constitution stated, and, "The accrued financial benefits of each [government] pension plan shall be a contractual obligation thereof. …"

These stipulations mandated a sound practice — sufficient annual payments — and reinforced it with a threat. Government employers that failed to meet their annual obligations could not expect to dodge their pension commitments when the employee retired.

Despite the clear intent and unambiguous language, the constitutional mandate hasn’t worked. True, employees retain an enforceable claim on the pension benefits they've already earned, but the state's public school employee pension fund — the last major traditional state government pension program — is underfunded in a way the constitution was meant to prevent.

The basic problem was recognized even at the convention: Without complex constitutional language that would bring a "proliferation of litigation," the Legislature can't be forced to make pension appropriations. Indeed, although the Michigan Supreme Court ruled in 1996 that the Legislature had violated the state constitution by failing to make adequate annual pension contributions, the court also held that it could not compel the Legislature to appropriate money.

History has shown that without a legally enforceable funding requirement, legislators fall prey to the all-too-human tendency to court popularity by promising more than they can afford and postponing the cost until later, well after they have left office.

No amount of technical tinkering will change this fundamental dynamic, despite lawmakers' well-intentioned efforts to implement "best practices." The only way to start reducing the burdens on unborn generations 50 years hence is to stop adding new employees in the plan.

Patrick J. Wright and Thomas A. Shull are, respectively, senior legal analyst and senior editor at the Mackinac Center for Public Policy, a research and educational institute headquartered in Midland, Mich. Permission to reprint in whole or in part is hereby granted, provided that the authors and the Center are properly cited.