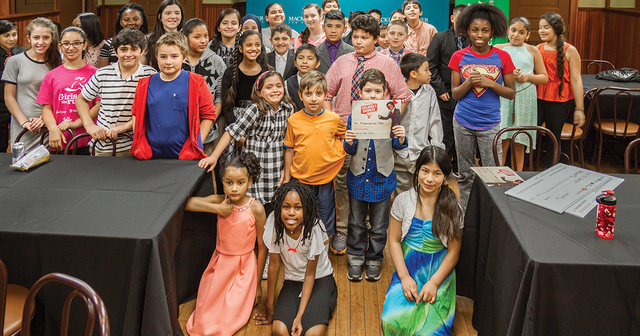 On May 13th, children from around metro Detroit gathered at the Detroit Historical Museum for the second annual Detroit Children’s Business Fair.

The event, hosted by the Mackinac Center for Public Policy and Junior Achievement of Southeastern Michigan, allowed children to sell goods to customers for real money. Testing their hand at being an entrepreneur, kids could win prizes for creativity, originality and business potential, and to get advice from a panel of expert judges on ways they might improve.

John Mozena, the vice president of marketing and communications for the Mackinac Center, encouraged sign-ups during an on-air interview with WJR Detroit radio host, Frank Beckmann.

“Entrepreneurs built the Detroit that we think about” Mozena said. “It’s great to tie into that history and for kids to realize that they can be the next Henry Ford.”

Comparing it to a combination of the traditional lemonade stand and a science fair, Mozena enthused about the possible implications of such an event.

The Michigan Chronicle, who also encouraged children to sign up for the fair, called it a “great place for kids to try their hand at entrepreneurship.”

Following the fair, the Chronicle published a follow-up article.

As more than 100 shoppers visited the nearly 20 youth-owned micro-businesses, an important dynamic became apparent, as participants grasped the bigger business picture. They embraced the value of hard work, increased their self-esteem and were eager to share their good fortune and commit a portion of their sales to philanthropic and charitable opportunities.

According to WDET radio, 14-year-old Zena Nasiri and 12-year-old Mena Nasiri brought their business – EenaArts – to the fair. Students from Morgan Lantz’s fifth-grade class from Escuela Avancemos also participated. These two groups alone sold everything from jewelry and scarves all the way to lava lamps, candy apples and ice cream.

“We just started realizing that we were actually selling a lot,” Zena told WDET radio. “At first it was kind of a casual thing and then it got more serious. And now I think we’re running it like an actual business.”

The Mackinac Center and Junior Achievement plan to host a third Detroit Children’s Business Fair next spring, with hopes that it will continue to grow and provide children with an educational and fun experience.

You can watch a recap video of the fair at the event’s website.